Video game traces the steps of refugees from Syria to Europe

One Syrian refugee’s story served as inspiration for an immersive video game called 'Bury me, my Love'. The user is put in the shoes of a Syrian man who traces his wife's path as she makes her treacherous journey to Europe.

Imagine this: Bombs are falling on your hometown in Syria, and this time, your wife's sister is one of the victims. Your wife, Nour, decides to flee the country and make the journey to safety in Germany. You, Majd, have to stay behind to care for your family. When Nour leaves, the only way you can stay in touch with her is over WhatsApp. One day, after you haven't heard from her in a while (you were beginning to worry), she messages you asking for advice on finding a smuggler, and you encourage her to find someone trustworthy. "How do I do that, look up their star ratings on the Smugglr app?," she retorts.

Nour is the fictional protagonist of Bury me, my Love, a reality-inspired interactive text-based phone game that traces the path hundreds of thousands of refugees have taken to get to safety in Europe. You are put in Majd's shoes, and as Nour's virtual counterpart, you support and advise her as she makes the treacherous journey from Syria to Germany. You chat with her on an interface that looks a lot like WhatsApp. You exchange emojis, photos, selfies and links with information when you can.

To play the game, you download it to your smartphone, and then you, as Majd, start texting with Nour, in real time. The game traces Nour's journey to Europe, and it offers you different options for how to respond to Nour's texts. You can caution her, encourage her, send her selfies or maps, trying to help her get to safety. Since you play the game in real time, often days can go by until you get a notification from Nour that pops up on your phone. Like a sort of choose-your-own-adventure game, Bury me, my Love has 20 different endings. Like any game based on reality, some of the endings are tragic.

The game was developed by French production studios The Pixel Hunt and Figs, in cooperation with Arte. Florent Maurin, the head developer, says the idea for the game came from reading an article in the French newspaper Le Monde. "It was about a young woman named Dana who traveled from Syria to Germany, and about how she kept in touch with her family throughout the journey over WhatsApp," he says. "It was a really intense experience as a reader, because I use WhatsApp every day, and like Dana I use emojis and I make jokes with my family — but there is one huge difference, which is that they were discussing matters of life and death." 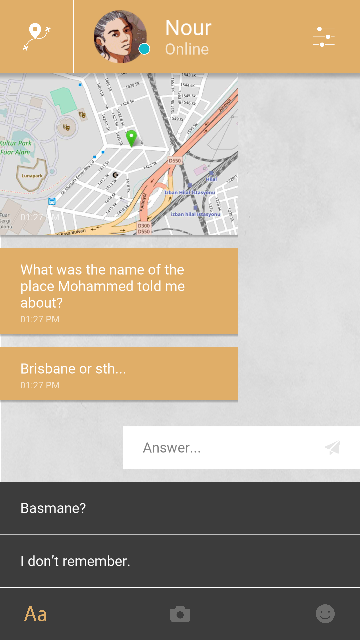 Maurin got in touch with Dana (whose last name is withheld to protect her privacy) and asked if she would be willing to come on board as a consultant. In writing the text for the game, Maurin says, "we had a lot of questions about how a life of a young Syrian woman or man looks, and how is it different from our lives? We wanted [the text] to be as natural and faithful as any conversation that any young Syrian person could have with another," he says.

To flesh out these small but specific details, Maurin and writer Pierre Corbinais would ask Dana questions about her experience, for example: "How does a random check work when you’re stopped in Syria? What was the border crossing between Syria and Lebanon like? What is a joke you would tell to an 8-year-old Syrian child?"

Dana's experience is similar but not identical to some aspects of Nour's journey in Bury me, my Love. Dana is a 25-year-old refugee from Damascus who now lives and studies in Germany. Dana made the difficult decision to leave Damascus after her mother was jailed by police for ten days without reason. "The police came to our house three times, and they were asking about my brother and sister before they took my mother," she says.

From Damascus, Dana's trip took two weeks. She and her brother-in-law traveled from Syria to Lebanon to Turkey, where they were delayed by unreliable smugglers, before taking a boat to Lesbos. "The boat’s capacity was fifteen people, but we were more like forty people," Dana says. "Our driver was a sailor, and we were lucky because our boat got stuck and he knew what to do — he put a knife somewhere in the motor and it worked again."

From Lesbos, Dana took a ferry to Athens, and then traveled across countless borders — "buses, trains, walking … really, it's hard to remember," she says. Now, she is living in Germany in a city with her sister and brother-in-law. Her other sister and brother live nearby. Her mother, though, is still in Damascus, and was recently denied a visa to visit Dana and her siblings.

Damascus, says Dana, is "not safe, but it’s safer than other places in Syria. There is no electricity, everything is expensive, and she has a lot of trouble with the police all the time. It’s hard to survive there," Dana says. 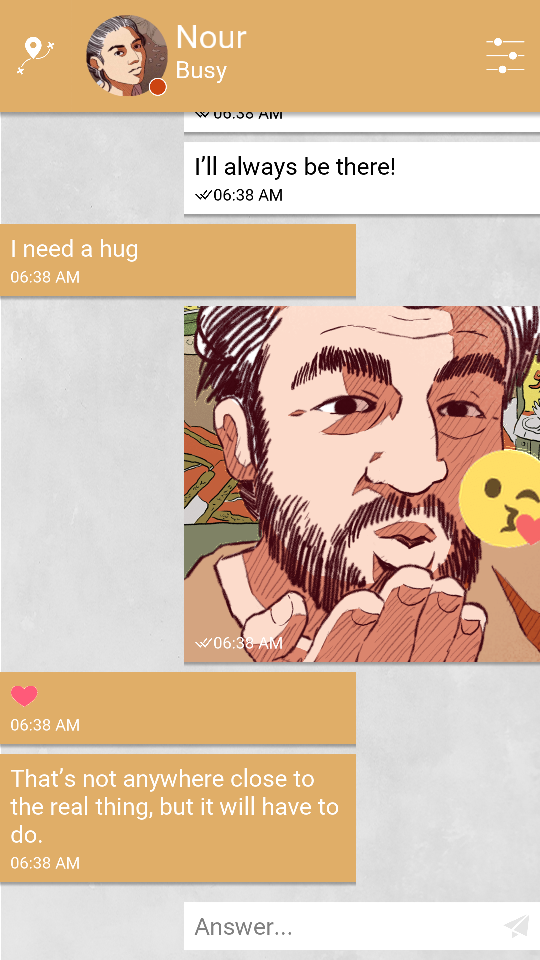 The name of the game, Bury me, my Love, comes from an Arabic farewell expression, which roughly means "I wish I could die before you die and you would bury me, because I don’t want to see you dying while I’m still alive," says Dana. It was the first message her mother sent to her over WhatsApp as Dana embarked on her journey in 2015.

Dana's mother hasn’t played Bury me, my Love, but Dana sends her all the articles written about it. "I think she’s very proud," Dana says. Maurin says that throughout the game development process, "we had feedback from Dana’s family because they all did the same journey."

Maurin says he hopes that Bury me, my Love can be used by Europeans to foster an understanding of the journeys of refugees and the worries their loved ones must suffer. "When you play the game you spend a lot of time waiting to get news from Nour," he says. Using smartphone notifications, the game "can mimic of the moments of anguish and agony when you are waiting for someone you really love to give you some news, and you’re in the dark and you don’t know what happened to them."

Before he began working on Bury me, my Love, Maurin says was inclined to consider the migration question in terms of numbers and figures. "How many there are, how many are in each country in Europe … It’s not wrong, because you need numbers to build up public policies," he says. "But you tend to forget that for each migrant who is lining up on the borders of Europe, there is a family, people who worry about them and who would like to see them again one day."