The northwestern Greek city of Ioannina is currently home to around 400 migrants and refugees. NGOs are taking care that they are kept warm and fed over the winter months. The migrant camp's director is happy to receive people in his hometown and describes how his family were once refugees themselves.

These days, Greek politician Philippos Filios is the director of a refugee and migrant center in the city of Ioannina. Most of the refugee families there come from Syria and Iraq. But he never forgets that during the Second World War, his own parents managed to escape Nazi-occupied Greece and find shelter in Syria.

"It is an amazing story: In 1942, my parents got married on a winter's day at 5 p.m. Only one hour later they got on a refugee boat to Turkey. They had paid smugglers to help them reach Syria," Filios told DW. The couple spent three months in Aleppo, sleeping in a tent. After all the refugees were registered, the British authorities discovered that Philippos Filios was a highly qualified military doctor and offered him full-time work in a military hospital in Egypt. The newly-married couple moved to a decent hotel in Port Said. "And I tell you, this was a real honeymoon," Filios says with a smile. Now, 75 years later, Filios receives thousands of refugees, mainly from Syria and Iraq, in his home city of Ioannina, where he also served as mayor. The main camp, Santa Helena, situated near the airport, is an extraordinary place. Originally designed as an orphanage by Constantin Doxiadis, one of the leading figures of contemporary Greek architecture, it hosted abandoned children from Albania in the nineties and was recently rebuilt and modernized with funds by the UN. But its traditional stone architecture has been completely preserved.

Filios says he is proud of this place. And not only that: The smart politician knows too well that modern refugee facilities bring money to his home region of Epirus, one of the poorest in Western Europe. "A total amount of ten million euros has flown into our region and 400 jobs were already created here," he says.

Most residents in Ioannina belong to the so-called vulnerable groups. This includes single mothers, families with very young children, adults with health problems and disabled persons. They require special care, which is sometimes impossible to find in Greece. One example is Riad Jumma and his family. His wife and son suffer from a serious kidney disease that can only be treated in Germany or Great Britain, according to the doctor in Ioannina. "After escaping death in my home country, I don’t want to lose my beloved wife here in Greece," the man from Iraq says, moved to tears.

Riad Jumma has experienced a year-long odyssey in Syria, Jordan, Turkey and now Ioannina. In Iraq, he suffered persecution, in Turkey he was robbed. And what about Ioannina? "Here we spend our time eating and sleeping, nobody is asking what we really need," he complains. This is a common statement about Greek camps, as legal or bureaucratic procedures take time and residents are left feeling uncertain about their future.

The good news is that the Santa Helena site is well heated, Riad says. This is especially important, for winter in northwestern Greece hits hard, with plummeting temperatures, frosty nights and week-long rains. Heating in the camp is on almost 12 hours a day, says Jorgos Giovanoudis, coordinator for InterSOS, an Italian NGO operating in Ioannina. We ask him about the emotional impact of refugees' stories on him and other NGO workers. Of course, we sympathize with those people. They have suffered a lot," he replies. "But we need to draw a line and act in a professional way. Even if something affects us, we can't express it in front of the ayslum seekers, because we need to treat everyone equally." 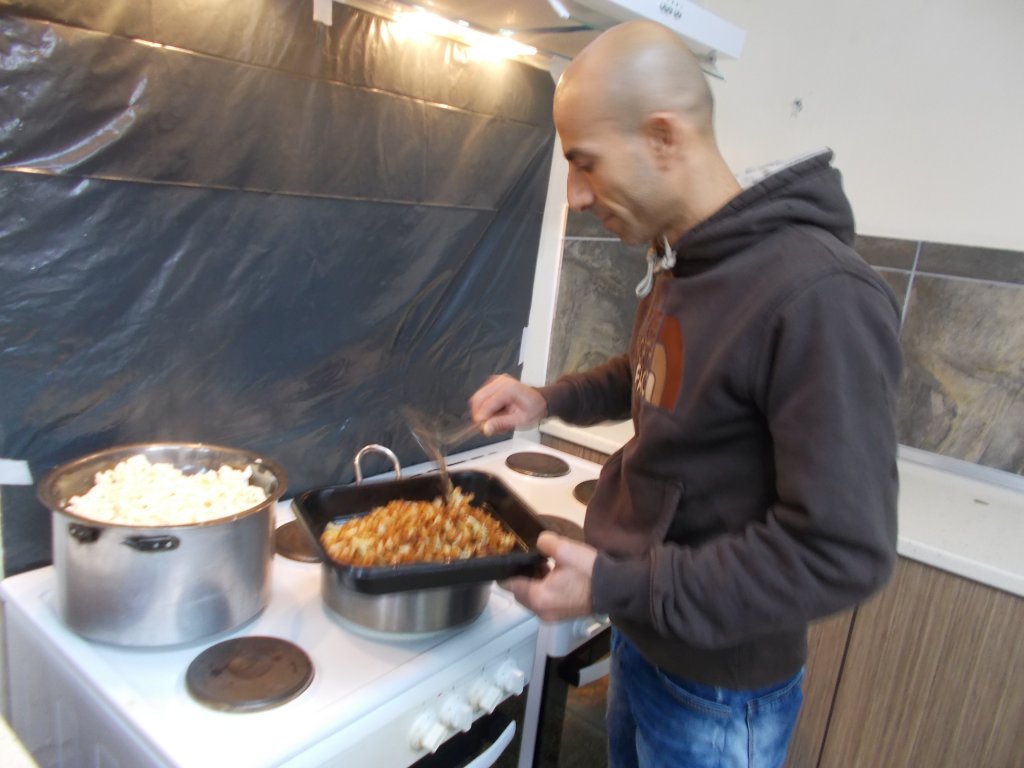 Applying for asylum in Greece

Yasser Hassan Hassun from Syria makes the most of the Greek winter and spends much of his time cooking for his family and friends in the camp's communal kitchen. He has relatives in Germany, but says that he prefers to apply for asylum in Greece, even though he knows that daily life here can be tough. The 41-year-old would love to work. But that’s easier said than done, especially in times of crisis.

"There is no work for us. Even the Greeks go abroad to find a job," he stresses. But Yasser is a man with a plan. First, he wants to get asylum, then a Greek passport. Then he may be able to travel and work abroad as an EU-citizen," he says.

Meanwhile, the camp director, Philippos Filios, is making his own winter plans. Unfortunately, the state-of-the-art camp in Santa Helena has a limited capacity of 350-400 persons and this is nowhere near enough. Apparently, there will be new arrivals coming from the Greek islands. At the end of December local authorities reopened the former military camp in Katsikas, near Ioannina, which is now filled with containers.