Treacherous border crossing in the Alps

Migrants and refugees put themselves through all sorts of extreme situations to find a new place to live. The border region between Italy and France is especially perilous due to high mountain ranges and extreme weather conditions. Activists and local residents try to offer shelter and speak out warnings.

The France-Italy border is not just a line in the sand between two countries. In fact, there is not very much sand. The Alps tower over the border and well beyond the invisible line on both sides. For migrants and refugees attempting to enter France through Italy, this final part of the journey can be the most treacherous.

Migrants and refugees coming from warmer climates in the Middle East and Africa are usually not accustomed to the frigid snow and ice-capped trails in the mountain-side. Snow can pile up to a meter high or more, and with the risk of avalanches and hypothermia, it can make the journey that much more difficult to navigate.

Many of those who come to the border do not have the proper equipment or clothing to hike through the mountainous terrain. Mohammed Traore, a Guinean teenager, told Refugees Deeply that he had to walk in the snow with plastic bags on his sneakers, three layers of pants and a windbreaker. He attempted to cross the border with a few others with just cookies and water to eat and drink.

Migrants and refugees used to cross into France along the less treacherous Mediterranean coastline. That was until the border that lies 7 kilometers (4 miles) from the Italian town of Ventimiglia was closed. That forced migrants and refugees to head north into the mountains if they wanted to continue to France.

About a hundred migrants passed through the station at Bardonecchia in the second half of December. Find out why. #RefugeesWelcome #Journeys #RefugeeCrisishttps://t.co/rlYy4bW2aA

Though there are tunnels that motorists take through the heart of the mountains, migrants and refugees cannot use them as there is no proper shoulder to walk on the roads. The roads are also often covered by snow in the winter months and constantly patrolled by police. If they are caught, they are sent back to Italy, which is what happened to Traore before this trip.

Residents on both sides of the border know what the migrants and refugees are up against when they take on the unforgiving landscape. Traore and the fellow migrants were picked up by a French couple after they crossed the border. The couple took them to a local town, despite the threat of up to five years imprisonment and fines of 30,000 euros if they are caught by police. This French couple is not alone, as many French people near the border have helped migrants and refugees in a similar fashion.

The mayor of Briancon, a town on the French side of the border, gave migrants and refugees free use of the former barracks. The town helps the migrants as much as they can, donating food to the local shelter, doctors giving their services to new arrivals, and some families have taken migrants into their homes. 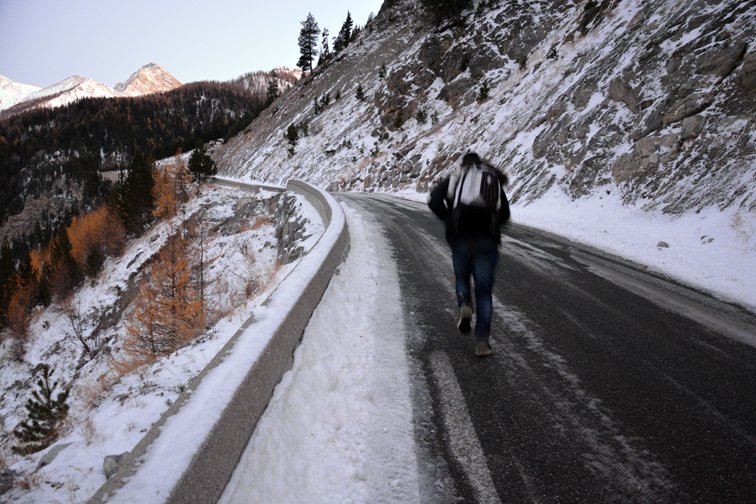 Joel Pruvot, who volunteers at the migrant center in Briancon, told Refugees Deeply, "this is a mountain town, and the rules of the mountain say that everyone who is in danger must be rescued. This is why all the citizens of Briançon are in this together. We are doing what the government is supposed be doing: preventing accidents from happening in the mountains, preventing people from dying."

In Bardonecchia, the town that hosted snowboarding events during the 2006 Winter Olympics, the train station has served as a makeshift center for migrants thanks to non-governmental organizations (NGOs). It is 16 kilometers to the first town across the border via the Col de l'Echelle pass.

There are shelters on both sides of the border staffed by activists who donate clothes and cook meals for those traveling further. NGOs including Rainbow for Africa, the Red Cross and Briser les Frontieres (Break the Borders) have all come together near the border. Traore received extra winter clothing from activists in Italy before crossing into France.

Journey is not finished

Even if migrants safely cross the border into France, they still have to find a local administrative office to apply for asylum. Offices can take days of walking to get to. The closest office to Briancon is 90 kilometers (56 miles) away in the town of Gap.