The town of Agadez is often the last stop in Niger for migrants hoping to travel to Libya, and then to Europe. A local football coach is using his town's strategic location to recruit the best football players from the migrants who are traveling through.

The football pitch in Agadez seems like a mirage. It is a slice of radiant green in the middle of the dusty yellow hue of a desert landscape. It’s on this vibrant lawn — the turf is actually synthetic — that three Nigerian migrants are playing football in the hope of winning a passage to the European El Dorado.

After 90 minutes of intense play under the blazing sun, it all comes down to a penalty kick. A section of the crowd breaks into gleeful cheers as Nassara AC scores, defeating its adversary, Nigelek. In doing so, the team secures itself a spot in the final game of the championship. Ten local teams play in the competition that takes place in and around Agadez.

This victory was particularly sweet for Abdulhadi Miko, aoriginally from Kaduna, in northern Nigeria. The 19-year-old athlete is one of four Nigerian who have signed contracts with club owner, Bachir Amma. Like the other migrant players, Miko is given room and board, and is paid 50,000 CFA francs (€76) per month.

The club also provides him with all his equipment, including his uniform and shoes.

"I hope to make the money to pay my passage to Libya by playing football for Nassara AC," the young footballer told InfoMigrants. "My plan is to stay here for a few months, until the end of the season. If we have good results, then I’ll get a bonus. In total, I need 300,000 CFA francs (€460) to pay the smuggler." 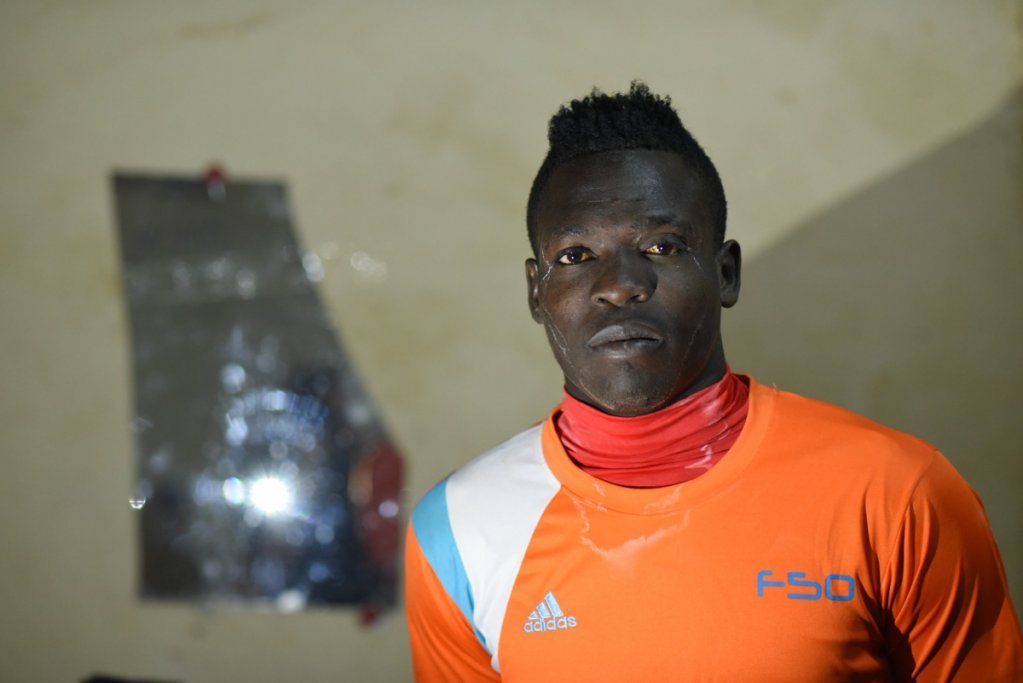 Abdulhadi Miko left Nigeria almost four months ago with three childhood friends and Europe on his mind. Two of the four have since returned to Nigeria.

Miko’s other travel companion, Mubarak Shuiabu, is also a footballer and was also recruited by Nassara AC. The two friends play defense side by side on a football pitch more than 1,000 kilometers north of their hometown.

This experience of exile and football is also familiar to Jeremiah Gujaghar. He is originally from the Nigerian capital, Abuja, and plays as a striker for Nassara.

"I’ve already played in teams in Benin, Ghana and, of course, in Nigeria," the 22-year-old says. "I even went to Mozambique for tryouts. But my dream is play in Europe."

"I came to Agadez because I heard about an opportunity to play for Coach Bachir Amma," Gujaghar says. "I’m ready to go through Libya, but only if the passage is safe. Ideally, I’d like to be scouted by a European coach who'd give me the chance to go to Europe by plane. That said, it doesn’t really matter if it is by plane, boat or car… I'm a believer, so I am putting myself in God's hands."

Pending a hypothetical European recruitment, Gujaghar’s hope rests on Bachir Amma, the owner of Nassara. After 90 minutes of incredible tension, Amma’s face relaxes the moment his team wins the penalty kick. Visibly relieved, he rises from the substitutes' bench, picks up his crutches and joins his players on the field to remind them that they are only a match away from winning the Agadez championship. 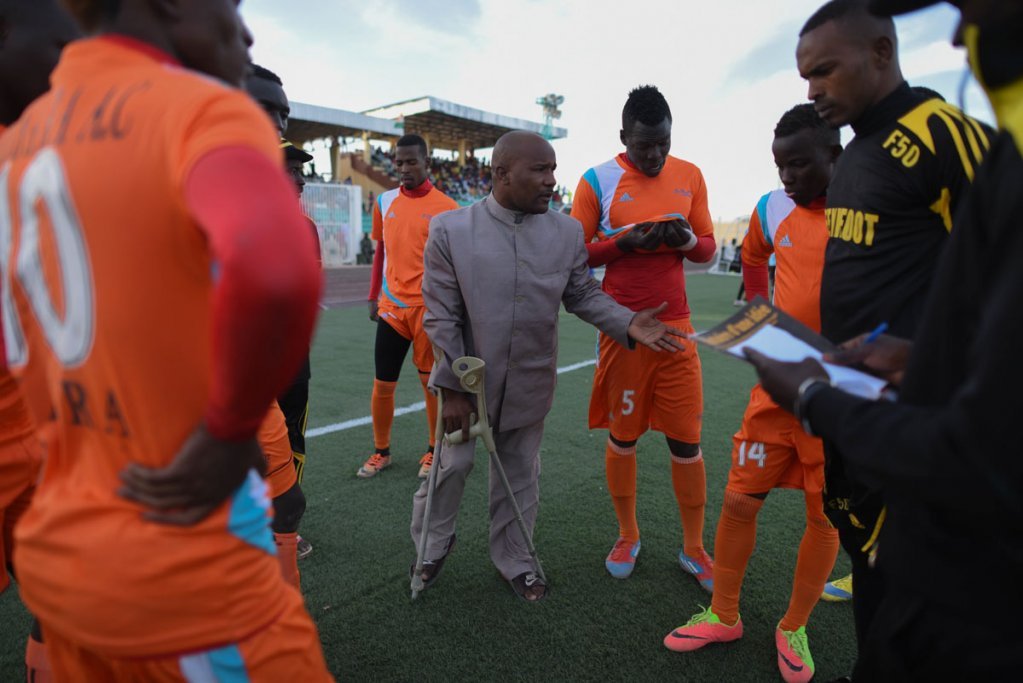 Just like his migrant players, Amma has a dream he’s been nursing since childhood. He wants to have the best football team in Agadez, and to lift his team from second to first division.

Amma was never able to play football himself. His legs were disabled in a nasty twist of fate after an antibiotics injection went wrong. Now, all his hopes rest on Nassara AC.

For several years, the football manager had a second source of income. As well as being a club director, he was also a people smuggler.

"I’ve always pampered my migrant football players," Amma told InfoMigrants, while standing in the room that he houses them in. Several years earlier, he used this same room to house the people he was smuggling to Libya.

"I’d put them through tryouts and, if they were good enough, I would invite them to stay and play for Nassara. Some players paid me for their passage to Libya in that way," says the former smuggler, who has since become president of the Association Against Illegal Migration.

'I discourage them from going to Libya'

Still waiting for the day when his team rises to first division, Amma savours this semi-final victory.

His car moves slowly out of the stadium with open windows and music blaring. He is heading to the building where he used to house the people he smuggled.

In the past, dozens of migrants squeezed into his dusty courtyard, awaiting the next stage of their journey. Now, it is almost empty.

These days, Amma houses his migrant players in a small room just a few steps from his own home. But he is careful to take the precaution of declaring their presence to local authorities. Several mattresses lie on the floor and the walls are covered with sheets. The decorations, which consist of the game schedules for big international clubs, are tacked on the wall, leaving no doubt that this space is inhabited by football fans. 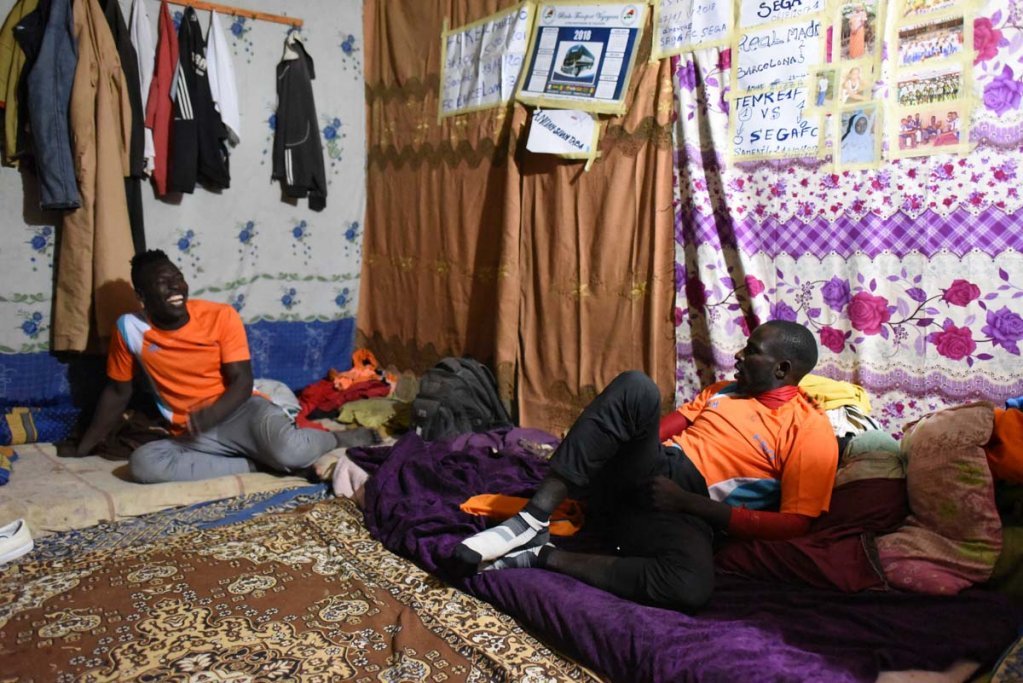 "I’ve completely stopped smuggling," says Amma, while showing off the room he lends to his migrant footballers. "After the championship, these guys are free to stay or return to their own countries. But I discourage them from leaving for Libya."

The journey to Libya has become more dangerous since people smuggling was banned in Niger. Now, to avoid being seen, drivers use back roads, which are farther away from rare sources of water in the desert. If they come across a police patrol, some don’t hesitate to abandon their "cargo" of migrants.

But these warnings, even when they come from a former smuggler, go in one ear and out the other for the many of the determined young footballers.

"I absolutely want to go to Libya," Miko says. "I’m not scared by the dangers of the desert or the stories of abuse. It’s out of the question to stay here or return to Nigeria. I’d be better off dead. My dream is to play for Lazio Rome or Napoli and I’m ready to risk my life to do so."