From tackling the root causes of migration to fighting human trafficking: The EU has many different goals for its migration policy. On paper they are sold as equal. Financially, they are not, as DW data analysis shows.

Thousands of asylum seekers arrived in Europe or died on the way trying to reach the continent between 2012 and 2016. In order to reduce the numbers of those entering the block and prevent further deaths, the EU set up the "EU Emergency Trust Fund for Africa" (EUTF) and earmarked 4.3 billion euros (status February 14, 2018) to fight "the root causes of irregular migration", as theFund's tagline states.

Fighting the root causes of migration - in other words improving the situation in the origin countries so people don‘t want to leave - sounds like a goal hardly anyone can find fault with. If you read EU documents on the Trust Fund, the projects that are mentioned often fall into the category of ameliorating the situation on the ground: empowering the youth in Ghana, enhancing living conditions in Ethiopia or increasing food security in Mali for example.

Take a closer look at the data, however, and it becomes clear how the EU prioritizes among its many goals. By following the money from the EU we can see which areas the union puts the most emphasis on when it comes to migration policy. The numbers show that stopping migrants along the way is at least equally important as changing the underlying causes of migration.

Money not primarily for origin countries

For a start, the largest amount of the Trust Fund money does not got to where the majority African migrants are coming from. By a large margin, Eritrea, Nigeria and Somalia are the three countries most African asylum seekers came from between 2012 and 2016. The greatest amount of money from the EU Emergency Trust Fund, however, goes elsewhere.The biggest single recipients are Niger, Mali, Senegal, Libya, and Ethiopia. Contrast that with Somalia, which ranks 9, Nigeria 10 and Eritrea - the country with the most African asylum applicants to the EU – is 20th out of 26 EUTF recipient countries. In other words, the country most in need of EU funds to fight the root causes of migration is far down on the list of countries actually receiving those funds. A closer look at the data shows what kinds of projects the Trust Fund supports and where the EU places its priorities. The project area titled "greater economic and employment opportunities" makes up the largest portion of the Fund's budget. Investments like this can pay off as recent data analysis by the DW shows how it is possible to mitigate migration by supporting a region financially and thereby creating an economic perspective on the ground.

Despite these long-term benefits, humanitarian groups, experts and local media criticized the Trust Fund for focusing too much on tightening border controls and preventing migration instead of addressing the root causes of flight in the countries of origin.

DW data analysis shows they may have a point. Tackling the root causes of migration is not the only goal the EU pursues when it comes to issues of migration. In fact, it spends nearly the same amount of funds on what it refers to as "improved migration management" Untangling mixed migration flows is EU jargon for distinguishing between streams of refugees (people each EU country is obliged to protect under the Geneva Convention) and other migrants (which each EU country is free to accept or reject). The easiest way to do so would be to set up registration centers outside the EU to determine eligibility for asylum before migrants set foot in the EU. This idea has been brought up in the past by EU-leaders like the French President Emmanuel Macron.

In researching this story, an EU Commission spokesperson told DW that such centers were not under consideration. The spokesperson described EU efforts to deal with the situation on the ground in the case of Libya. "What we are doing together with the UNHCR is to offer legal pathways for resettlement from Libya for people in need of international protection. We have already seen the first evacuation of refugees from Libya. 25 people have been resettled to France, 162 to Italy, and another 202 have been evacuated to Niger with a view to further resettlement in Europe. Member States have already pledged nearly 40,000 places following the Commission's call to resettle a further 50,000 refugees by May 2019." 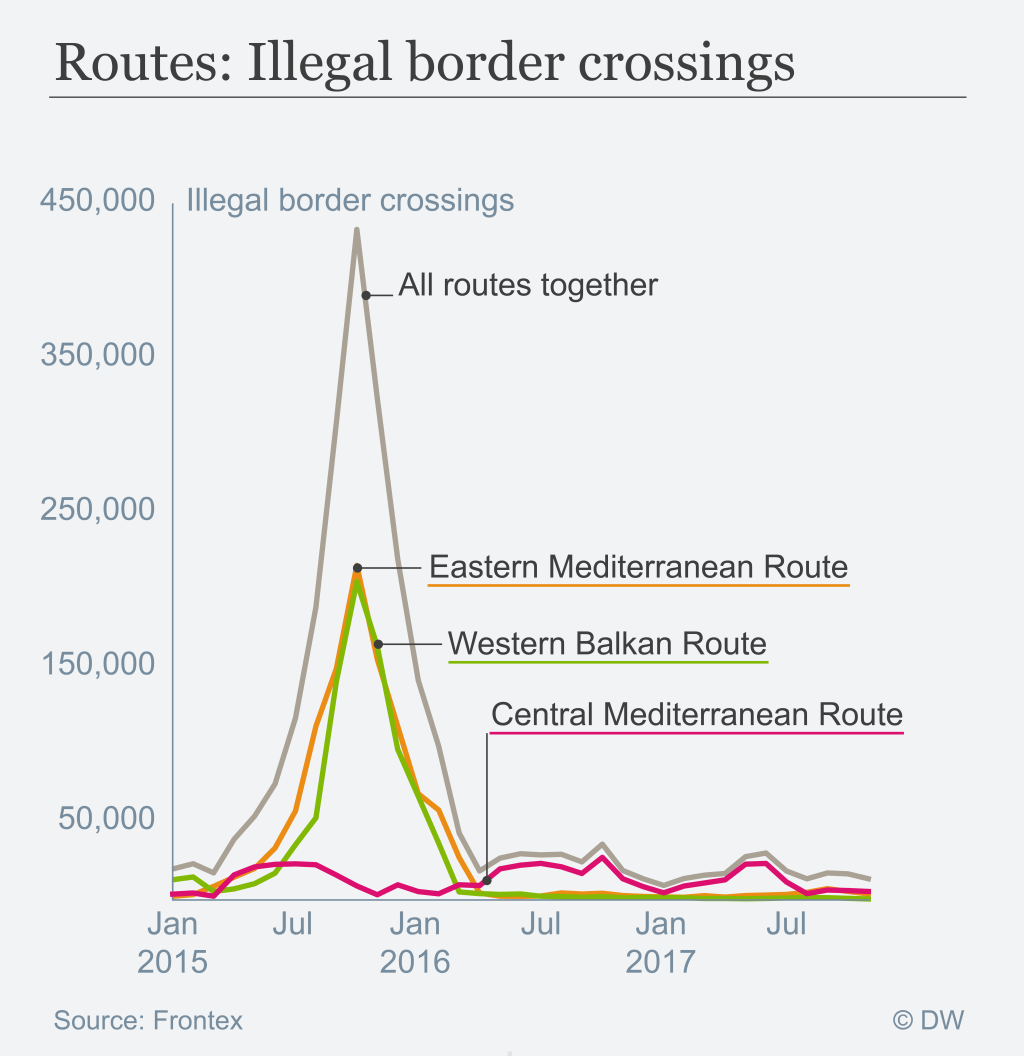 When we follow the EU money trail, we see that the budget of the European Border and Coast Guard authority Frontex skyrocketed over the last years. The budget position "Joint Operations" is the largest item on the expenditure list - and quadrupled since 2012 (from 32 million euros to 129 million euros). Since 2016, the budget also included a position on "Return Support". It had a budget of 39 million in 2016 and was increased to 53 million in 2017 (an increase of 30 percent), making it the second biggest position on Frontex' budget.

The intended message is clear: don't try to come to the EU. But several migration experts warn that deterring illegal migration with sheer border force doesn't work, because people will keep trying if the root causes aren't mitigated. As long as the demand of getting to Europe remains high, ramping up border force only results in human traffickers being able to charge even more for smuggling humans. In the experts' line of argument, if you really want to fight illegal migration, you have to open more legal pathways to Europe instead.

Read also: Frontex-Director Fabrice Leggeri says 'border control itself is not a panacea'

At the moment, however, it doesn't look like that's where the EU is targeting its efforts. Two years after the major refugee wave EU money flows mainly into securing borders and fortification. While resources for internal security are raised continuously, the budget for asylum, migration and integration decreases. 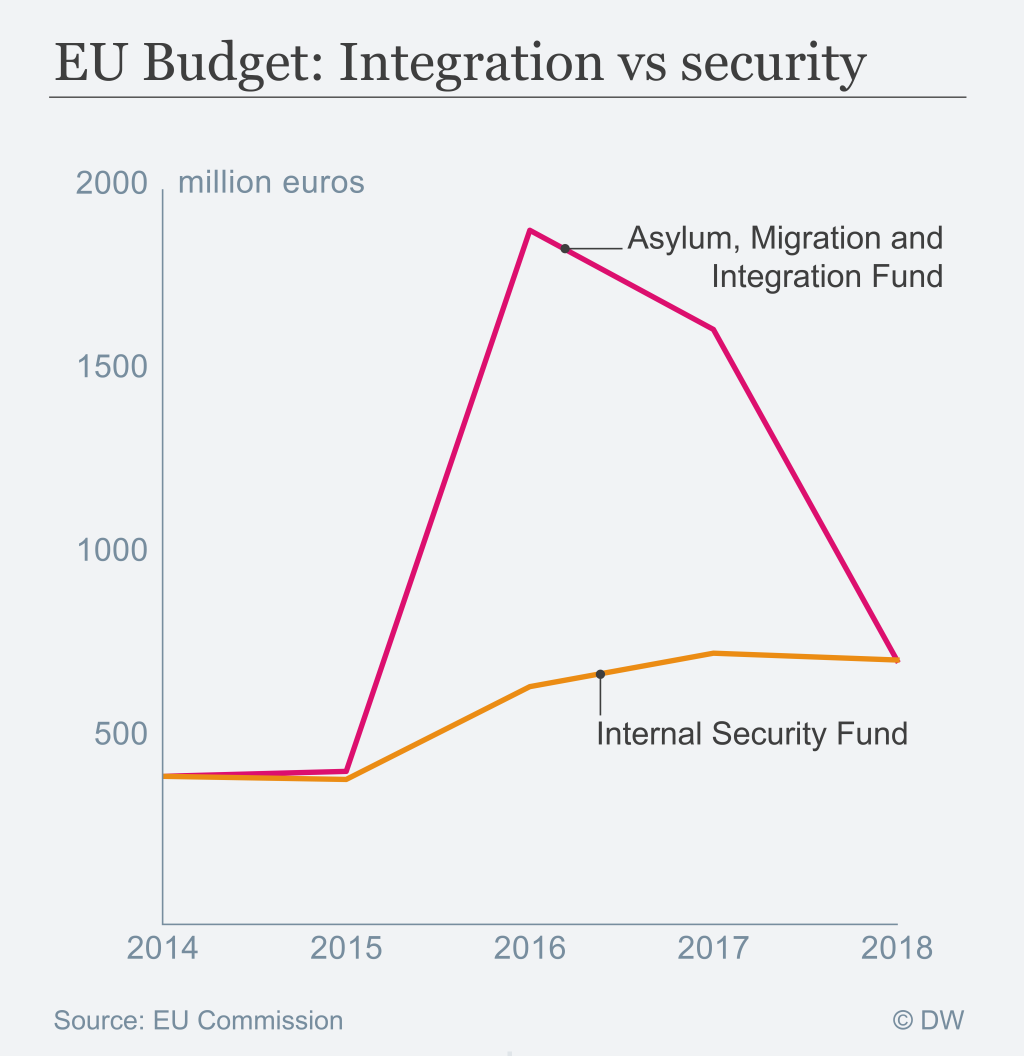