A journalist aboard the search and rescue ship of the NGO Proactiva Open Arms says the Libyan Coast Guard threatened rescue workers and migrants with death if the workers didn't turn over rescued migrants to the Libyan authorities. Meanwhile international support is growing for the Italian NGO.

Mas was aboard the Catalan NGO's ship as part of reporting for the website 'Ara.cat', where she wrote an online journal of her experience. Following the ultimatum issued by the Libyans, Mas said the ship's captain decided "to launch an anti-pirate alarm because he feared for his crew."
After the tension, ship seizure
Mas said the tension continued, as "for more than an hour the patrol boat circled our lifeboats". She said one of the Libyan Coast Guard members even boarded the migrants' rubber dinghy, and "the men who had faced the sea jumped into the water, preferring to drown rather than go with them."
In the end, however, the Libyans gave up and the Proactiva's ship headed north. The Sicilian district prosecutor's office filed a seizure request for the ship, which will be handled by the head of the preliminary investigation judges' office in Catania, Nunzio Sarpietro. He must rule on the seizure within 10 days.
Meanwhile, the ship has been impounded in the port of Pozzallo since March 18, and the crew left the ship on March 21. The ship's captain, Marc Reig Creus, 42, and head of mission Ana Isabel Montes Mier, 31, are under investigation along with the NGO's general coordinator Gerard Canals, for conspiring to commit a crime aimed at clandestine migration.
The probe is focused on the rescue of 218 migrants and the ship's subsequent actions at sea. The charges state that the ship, despite being close to Malta, where it disembarked a three-month-old baby boy and his mother for health reasons, did not request to dock at the port, even though it had been told to do so numerous times by port authorities in Spain and Rome.
Open Arms sees 'shadows' on the case
Proactiva Open Arms' head of mission Riccardo Gatti said he sees "shadows" in the investigation by the Catania prosecutor's office. "Coincidentally, one week after the elections, this happens. And those who took the most votes at the polls are promoting an anti-immigration platform. It's certainly a strange coincidence. It seems overzealous to incriminate us for something that leaves us surprised," he said. Those under investigation also defended themselves in statements highlighting that they were "acting in a humanitarian capacity" with the "sole objective of saving human lives" and "rescuing people who were about to drown." 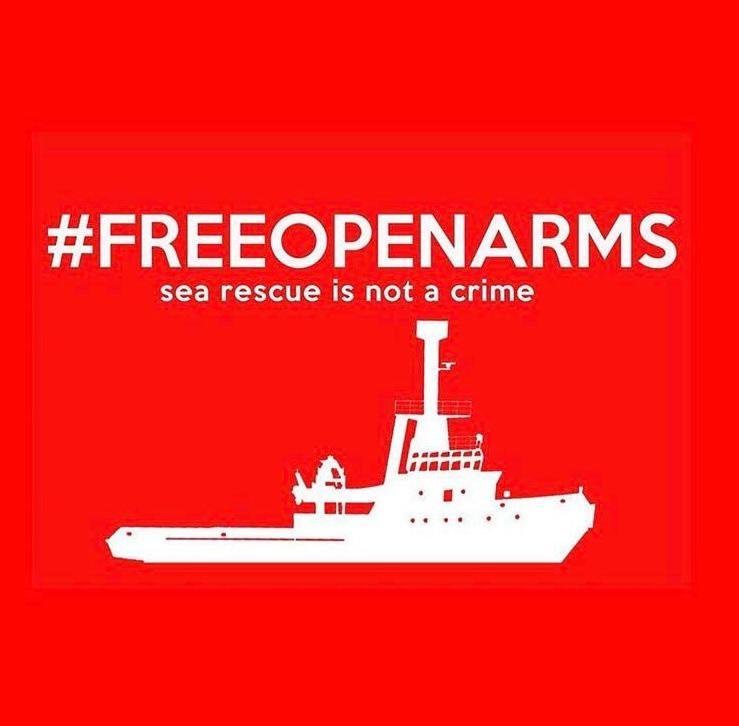 Support for NGO
Meanwhile, Italian and international associations and organizations have launched various appeals and an online petition expressing their support for Proactiva Open Arms.
Expressions of solidarity have come from NGOs that have been working for some time in the Mediterreanan, including through Twitter with the hashtag #freeopenarms. Support has come from the German NGO Jugend Rettet, which went through a similar experience following the seizure of its ship Iuventa, over which the court of Rome will issue its ruling on April 23. The NGO Sea-Eye also expressed its solidarity on social media, highlighting that "rescuing is not a crime."
The association SOS Mediterranee, whose ship Aquarius is currently the only NGO migrant rescue ship active in the Mediterranean, said the seizure of the Open Arms "is very worrisome for rescue operations" and that "compromising rescue operations is equivalent to putting lives at risk." The organization Sea Watch promoted an online petition calling on the Spanish Foreign Minister to appeal to the Italian Justice Minister to release Proactiva Open Arms' ship.
"Disregard for decency"

Harsh judgements about the ship's seizure and Italy's charges against the Spanish NGO have also come from Italian associations, including Baobab Experience, the Association for Legal Studies on Immigration, the Italian Coalition for Freedom and Civil Rights and the Federation of Italian Evangelical Churches, which in March had started a collaboration with Proactiva Open Arms by boarding two of its members on the NGO's ship.
Amnesty International's Director of European Campaigns, Fotis Filippou, said that "by seizing the ship that refused to hand over migrants and refugees, the Italian authorities have shown a reckless disregard for common decency" and that "NGOs saving lives at sea should be supported."
Doctors Without Borders (MSF) is appealing to the Italian government and other European governments and denouncing all actions that hinder life-saving rescues in the central Mediterranean and bring people back to Libya. MSF Operations Director Annemarie Loof said the seizure of the Open Arms "is the most recent in a long series of actions undertaken to hinder the NGOs working to save lives at sea."