German foreign minister sees 'other side' of refugee plight in Jordan

Heiko Maas looked uncomfortable as he sat among a group of refugees in Jordan on Thursday. After an excited young boy — no older than 12 — whispered in his ear, cameras began snapping for what seemed like several minutes. Maas was markedly relieved when the scene ended. Interactions staged for the press are not yet the new German foreign minister's thing.

Just days after visiting Israel and the Palestinian territories, Maas traveled to Jordan, where roughly half the population is estimated to have Palestinian roots. Shortly before Maas departed for the capital, Amman, Saudi Crown Prince Mohammed bin Salman made headlines by stating that Israel had the right to exist as a sovereign state.

When Maas touched down in Amman on Wednesday, he called the announcement a "positive development," while at the same time pointing to the many conflicts in the region and the various actors involved in them. Germany, he said, would seek to do what it could to help bring an end to the tension. 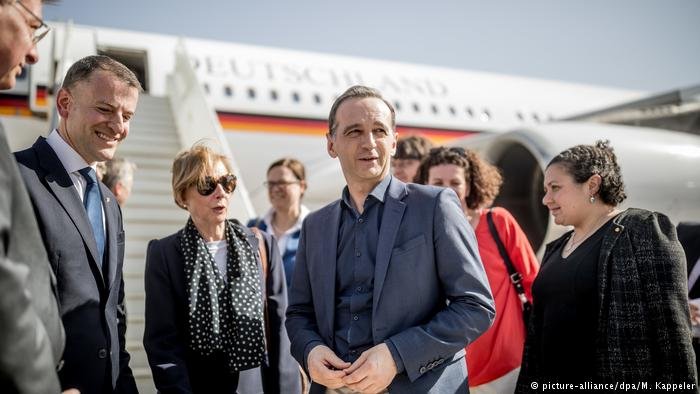 While in Jordan, Maas said he wanted to "see the other side of the refugee situation," and also support "one of the most important partners in the region." During his visit, he was frequently told that the small country has reached capacity: The government estimates that as many as 1.3 million Syrians may currently be residing in Jordan, as well as about 75,000 Iraqis, putting extra strain on education, housing and health services.

Many Western countries view Jordan as central to stability in the region. The United States just increased direct foreign aid payments to the country by almost a quarter, bringing them up to more than $1 billion (€815 million) annually — while at the same time cutting them almost everywhere else. Germany is Jordan's second most important foreign aid partner, contributing €596 million toward development projects every year.

Maas received a roaring reception from his host, Jordanian Foreign Minister Ayman Safadi, the evening before official talks began, yet the two men spoke of challenges the following morning. Both diplomats are convinced that there can be no military solution to the ongoing civil war in Syria.

In Jordan, hope that refugees can soon return home has all but evaporated, making Amman all the more keen to receive more economic assistance. Germany's new government is currently working on its first budget and Maas assured his hosts he had heard Jordan's pleas. "Jordan can depend on Germany," he said. "We are bound by the need to live out our humanitarianism."

Yet, for all of the solidarity that both countries profess when it comes to issues like refugees, Jordan, as part of Saudi Arabia's military alliance in Yemen, remains a conflicted partner. The coalition treaty behind the new government in Berlin stipulates that Germany will no longer sell arms to countries directly involved in the war in Yemen. Just how "direct" Jordan's involvement in the conflict is will soon become an important issue for German leaders.

The future of family reunifications

Jordan's second-largest refugee camp is located outside Azraq, about an hour's drive from Amman. It was constructed as a potential small town from the start, and the 37,000 or so refugees living in the camp are not expected to be going home anytime soon. 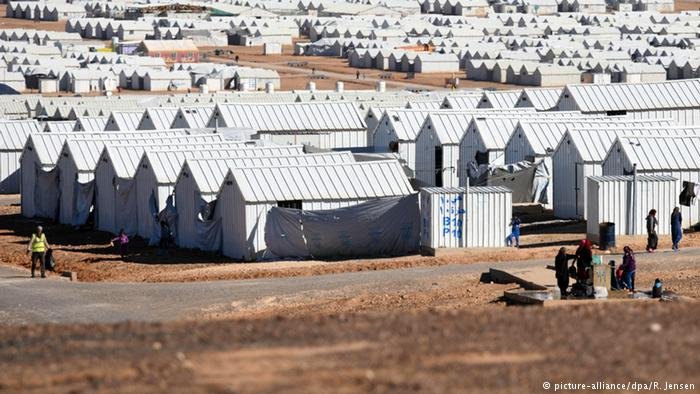 At the same time, a number of Syrians here hope that they will be able to join their relatives in Germany beginning in July, when refugees with German subsidiary protection will be allowed to make use of their right to family reunification. Just how many people will take advantage of this legal immigration option has been the source of a heated debate in Germany. Estimates fluctuate from 50,000 to over a million. Germany's government claims that it will be unable to compile sufficient data for predictions without help from the International Organization for Migration.

Yet German officials are still undecided on how the new government's laboriously negotiated compromise on family reunification can even be implemented. The ruling coalition of Angela Merkel's conservative Christian Democratic Union (CDU), its Bavarian sister party the Christian Social Union (CSU) and the center-left Social Democratic Party (SPD) settled on a limit of 1,000 monthly arrivals. However, new Interior Minister Horst Seehofer, of the CSU, wants to severely limit who has the right to bring family members into the country.

After having seen with his own eyes how refugees in Jordan are the victims of complex conflicts in the region — above all in the bloody war in Syria — Foreign Minister Maas, of the SPD, will once again have to defend his party's refugee policy when he returns to Germany. While in Amman, he promised he would "not support any proposals" designed to "shrink the contingent of refugees."