The number of refugees receiving asylum in churches has risen sharply. This has caused annoyance in political circles. But Berlin’s Protestant reconciliation parish is holding to the ideal that it is the individual case that counts, and that is how things should remain.

Every story about having to flee is unique. And there are none who know this better than the members of the Berlin’s Protestant reconciliation parish. The parish church is situated directly on the former death strip at Bernauer Strasse. There, they remember in daily prayer the fate of people who fled from east to west and lost their lives at the Berlin Wall. Recently, the parish has started including more recent stories in its prayer services. Now, in the Chapel of Reconciliation, much revolves around the "refugees of our time," explains parish priest, Thomas Jeutner. "At our noon prayer service, we might remember the fate of a 21-year-old East German refugee who died at the Berlin Wall and in the afternoon, we might read from the biography of a 21-year-old Syrian who drowned off the Turkish coast. Sometimes it is possible to draw clear parallels in people’s lives. The singularity, but also the cruelty of such fates moves many here, the priest tells us.

Ten refugees given church asylum in the reconciliation community

Yet there are other ways in which the parish has experienced a close parallel between escape stories from the past and people’s displacement in the present. Around 18 months ago, the parish council decided, after an emotional debate, to offer church asylum. Such asylum is offered in exceptional cases, and in justified cases of hardship, the priest emphasizes. Nevertheless, church asylum remains a legal grey area. By getting a parish’s support, a refugee who is obliged to leave the country can initially have his or her deportation delayed, and in many cases, this can force authorities to undertake a new examination of the grounds for asylum.

"When we notice that decisions in asylum procedures have been decided on a superficial basis, or decisions have been made with many contextual errors, then we think it is necessary to stand up for that person and his or her rights," says Jeutner. Our guiding principle, as with our prayers, is the fate of the individual, he explains. "Our commitment comes to an end at the point when the German state actually deals with the case in its entirety."

The small parish, with barely 1000 members, has granted church asylum 10 times so far. Many other requests that have come from lawyers, refugee organizations or staff from refugee shelters have had to be rejected due to a lack of resources or because of a lack of urgency, the clergyman adds. Those who have received temporary protection here include people from Afghanistan, Iran, Chechnya and Bangladesh. The parish is currently taking care of three asylum seekers. Each of them is anxious for their case to be reopened after their asylum applications were rejected. Before the parish opens its doors to an asylum seeker, the parish council deals intensively with the person’s file and their respective escape history. This is often a painful process that many members of the parish council find overwhelming, says the pastor. They read about rape, arbitrary detention, torture and systematic persecution — and about the dangers to life and limb that the person would face if he or she returned.

Those who are offered church asylum by the congregation receive accommodation, food and a place of retreat — and a symbolic piece of paper. "As soon as those affected have our church asylum card, they can prove to third parties that they are no longer fugitives," explains Father Jeutner.

New peak in the number of church asylum cases

Nevertheless, this is not legally binding. On the contrary, church asylum is a practice that has, so far, been tolerated by the authorities. But the fact that the number of reported cases has reached a new high is now causing political controversy. According to statistics from the federal ecumenical task force, "Asylum in the Church," in March, there were 414 known cases of churches providing asylum in Germany, which involved 611 asylum seekers. In the previous year, there were significantly fewer people who were temporarily saved from deportation by the churches, with 308 cases of churches providing asylum, involving 511 asylum seekers.

For many state interior ministers, this slowing down of the asylum procedure has become a major headache. One of the main reasons for the irritation may be the public pressure to increase the number of returns of rejected migrants. The integration minister responsible for refugees in the German state of North Rhine-Westphalia, Joachim Stamp (from the Free Democratic Party), recently warned churches against trying to prevent deportations to transit countries by interpreting the church asylum too laxly. Such a practice "cannot be accepted by a constitutional state," the minister said.

More than 90 percent of the people asking for church asylum belong to the group known as "Dublin cases," which means that they are refugees, who under current EU law, should be sent back to the country through which they entered European soil. These countries are often Greece, Bulgaria or Italy — in other words overstretched transit countries from which migrant organizations repeatedly report violence and repression against refugees. 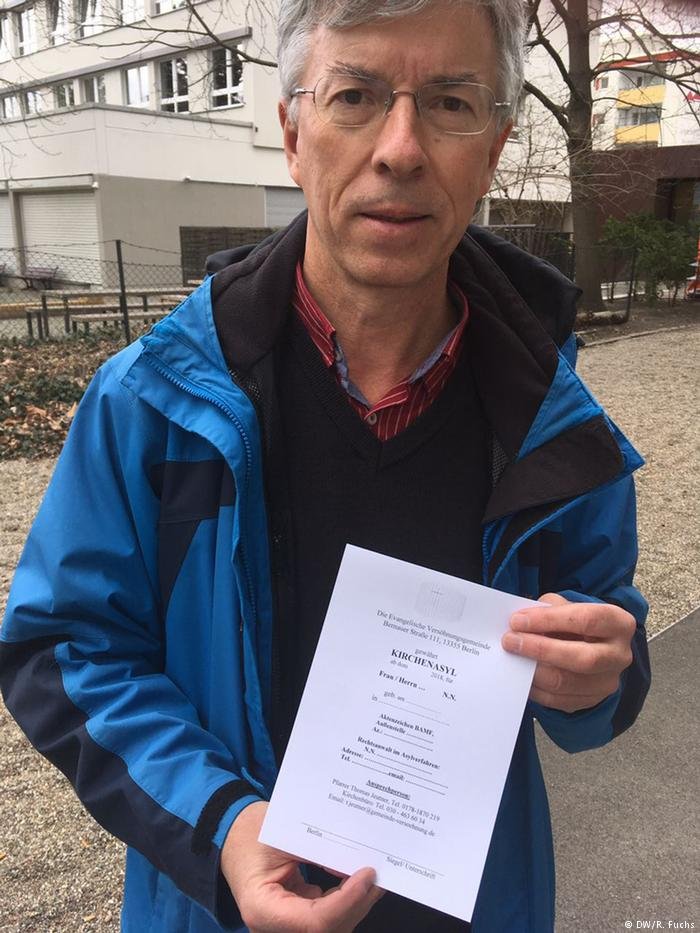 If there were no hardship cases, there would be no church asylum

In February 2015, both major churches, Protestant and Catholic, agreed with the Federal Office for Migration and Refugees (BAMF) to use the instrument of church asylum with sensitivity and restraint. It was said at the time that the constitutional state responsible for the asylum procedure must be able to assert its authority. But what does sensitive mean?

Lukas Pellio is a vicar in the Protestant reconciliation parish and a member of the board of the association "Church Asylum in Berlin-Brandenburg." He meets regularly with Pastor Jeutner to discuss current cases. He is adamant that the churches have no influence on the number of cases. "We cannot quantify the aid we provide because we react to people who come to us and then decide on a case-by-case basis," says Pellio. In Berlin, he currently knows of about 40 examples of church asylum. Approximately 50 are known in Brandenburg, which is the state around Berlin. Often the parishes are simply forced to deal with people in emergency situations, Pellio explains. "Some affected people go to a service and just sit there afterwards until we take care of them."

‘I slept peacefully for the first time in 30 years’

Nevertheless, members of the reconciliation parish can also feel that there is increasing political pressure. In some federal states, authorities have initiated investigations against pastors and parishioners. But these are still exceptions. And so far, there is no known case where an arrest warrant has been obtained. But whether this will remain the case? Father Jeutner searches for an answer, shrugs his shoulders a little. 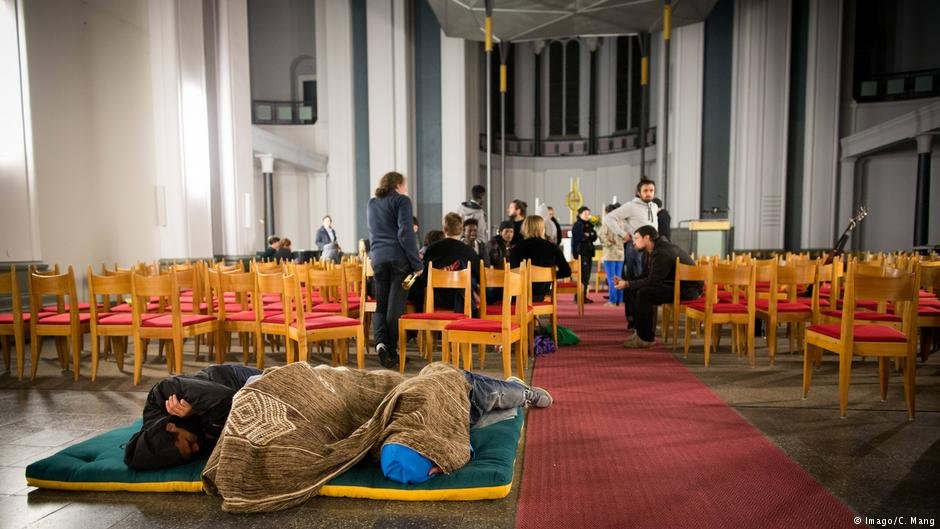 Then he says aggressively, "If we are attacked, the whole Church will be attacked." But, he continues, perhaps political decision-makers should also risk changing perspective. "It's actually embarrassing for our country that we even need church asylum." He remains silent for a few seconds.

As he says goodbye he describes a handwritten letter that recently landed on his desk. A refugee from the Middle East thanked the leaders of the parish for his time with them. He began his letter with the words: "When I stayed with you, I slept peacefully for the first time in 30 years." For Father Jeutner, these words are like a gift that motivates him to keep going with church asylum.