A German refugee support organization has developed apps for smartphones to help migrants living with psychological symptoms of stress. The online mobile therapy service is available in Farsi, English and Arabic.

ALMHAR is designed for refugees who have had to flee from their homes and may be living in exile. It's available in Farsi, English and Arabic. The app explains the most common emotional problems experienced by refugees and offers basic support for dealing with them. It provides background information on twelve common problem areas and gives practical advice.

The ALMHAR project was developed in response to the growing number of refugees from war and conflict zones. Researcher and app co-developer Dr Nadine Stammel says "there has been a higher demand especially for mental health resources in Arabic both from those affected and from professional colleagues." "With ALMHAR we ... offer exercises that can be done independently or incorporated into a course of therapy. Most of all, we want to provide support for self-help and, ideally, early intervention to stop the symptoms getting worse," Stammel says.

However, the developers warn that the App is not a substitute for psychotherapy. They emphasize that people whose problems are severe or who have considered self-harm or suicide should go to a hospital and see a doctor or therapist. 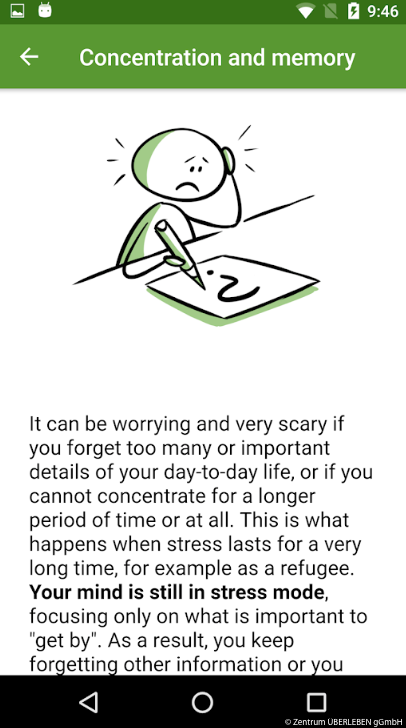 SMILERS, which is available only to iPhone users at this point, is aimed at people with milder symptoms of depression. It is a self-help app that is specifically aimed at Arabic speakers. It can be used without the need for any direct contact with a therapist.

The SMILERS app takes users through seven modules over the course of seven weeks. Most of the modules are picture stories, portraying, for example, the treatment of a fictional person. The app offers some short practical exercises as well as important information about depression and how to deal with it.

What is so different about these apps?

Over the past decade, a large number of online therapy programs have been developed. The SMILERS App grew out of a project called Ilajnafsy, which has offered Arabic speakers suffering from depression or trauma-related disorders access to internet-based psychological support since 2008.

Maria Böttche, a leader of the Center Überleben research team, says the mobile App will open up the possibilities for receiving support to people who may need psychological help but don't have regular access to a computer.

SMILERS can be downloaded from the iPhone app Store and ALMHAR from Google Play.