Social benefits in Germany: Who is entitled to "Hartz IV"?

In Germany the number of foreigners receiving unemployment benefits is rising with growing migration. When are refugees and asylum seekers entitled to social benefits?

In December, 5.93 million people in Germany were receiving benefits under the unemployment and welfare package known as "Hartz IV" ("Hartz four"), according to the Federal Labor Agency. About two million of them, more than 34 percent, were foreigners. Nearly half of those came from countries outside Europe. Syrians made up the largest group with 588,301, meaning that every tenth recipient of Hartz IV is from Syria.

Overall, people from 193 foreign states and territories received Hartz IV benefits. Around 439,000 people were from EU countries -- mainly Bulgaria, Poland and Romania. The second-largest group of non-EU foreign recipients after Syrians were from Turkey (259,447), followed by Iraqis (138,000) and Afghans (99,000).

Not every foreigner can claim these benefits. They must meet certain criteria first.

Applicants have to prove they are living in Germany legally. To do this, foreigner citizens have to present their residence permit to the job center, the agency handling the entire Hartz IV procedure.

Those who reach Germany as refugees initially receive benefits under the Asylum-Seekers' Benefits Act (Asylbewerberleistungsgesetz). They can file for benefits with the job-center only after they have been officially permitted to stay in the country.

You don't have to be unemployed to be eligible. You may be employed but in a low-income job, which is usually considered as a job that does not pay more than 450 euros.

Foreigners also have to prove they are not just in Germany for a short period of time, for example, as a tourist. The "principal residence" must be in Germany. This status, which is also the basis for many legal considerations, is one of the criteria for claiming Hartz IV.

Citizens of other EU states who do not legally require a resident's permit (Aufenthaltsgenehmigung) have to present a tenancy agreement, their registration certificate (Meldebescheinigung) and a form of personal identification to the job center.

Some people do not qualify automatically, for example those who have come to Germany to look for work cannot apply for benefits. 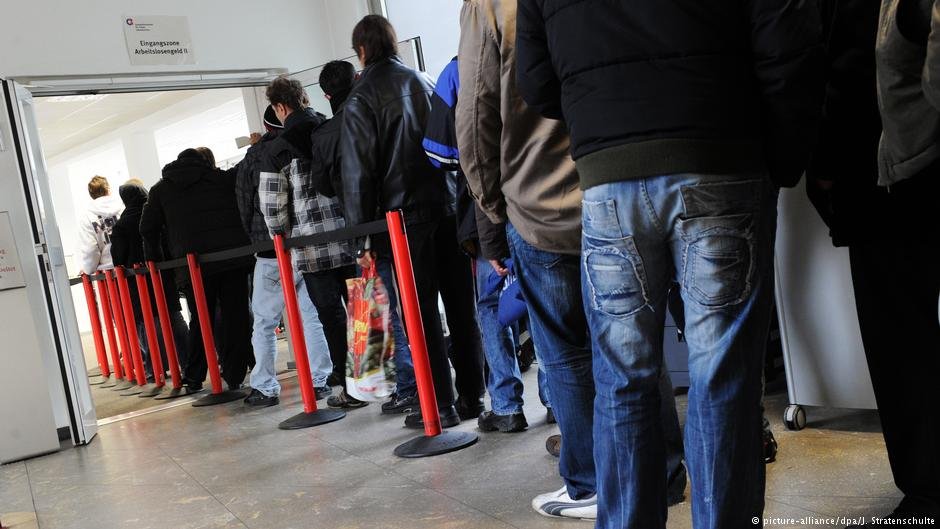 In principle, citizens of the EU may seek employment in all member states. Citizens from the new member states, except for Malta and Cyprus, had to wait seven years before they could join the German workforce. Since May 1, 2011, and January 1, 2014, respectively, there has been full labor mobility within the EU.

Who is entitled to financial assistance?

Under Hartz IV rules, those who cannot make ends meet on their income and personal assets, including with help from relatives, can qualify for assistance.

Many immigrants struggle to find formal employment, which includes social insurance. In 2017, more than 32 million people in Germany had a formal job. 3.5 million of those were foreigners, but only 1.5 million came from non-EU countries.

All employees in Germany, no matter where they come from, are entitled to supplementary benefits from the Job center if they are working in low-income jobs and cannot afford their rent or their living costs. They are called "Aufstocker", as in people to be "topped up".