The dangers of life as a refugee in Ventimiglia

A report by Refugee Rights Europe called "In Dangerous Transit" describes the challenges migrants face in the Italian town of Ventimiglia on the border with France. InfoMigrants takes a look at the findings.

The report, "In Dangerous Transit: Filling Information Gaps Relating to Refugees and Displaced People in Ventimiglia, Italy," was released by the UK-based human rights organization, Refugee Rights Europe. It is based on research conducted in August 2017 by a team who met with migrants in the town.

Ventimiglia is a popular transit point for migrants trying to reach France. The researchers say that around the time of the study, one grassroots group estimated that there were between 600 and 800 migrants in and around the town, about 80 percent of them young men and boys from Sudan. According to Caritas, about 400 migrants were housed in a Red Cross camp and some 300 others were sleeping rough in unsanitary conditions on riverbeds and under bridges. 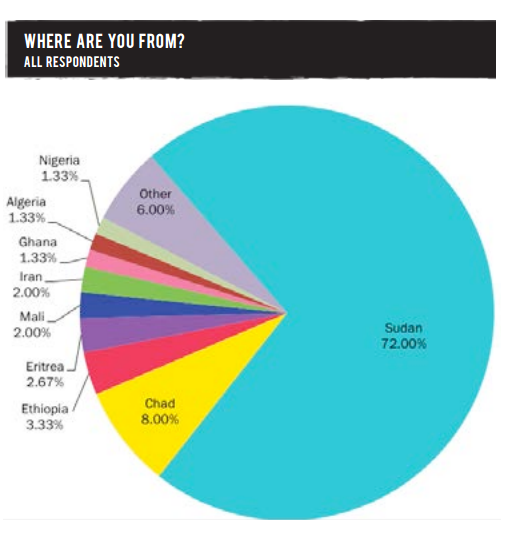 All of the respondents surveyed by Refugee Rights in Ventimiglia were male. Almost all of those under the age of 18 were unaccompanied by their parents. About two thirds of them had spent between 1 to 3 months in Ventimiglia in the same conditions as the other migrants. The researchers were unable to gain access to any women or girls, and NGOs confirmed the number of women refugees in the town was very small. The report suggests this could be because of the extent of sex trafficking in southern Italy and North Africa.

The report says feelings of insecurity in Ventimiglia are widespread. Most of the men surveyed said they “didn’t feel safe at all.” When asked about the biggest risks faced by people passing through Ventimiglia, they cited dangers related to border crossings. A small number (7.4%) said they feared being robbed or attacked by other refugees, while nearly 9% cited the risk of violence or sexual abuse by police or Europeans.

The report also refers to a significant number of deaths of refugees. Many respondents knew of people who had fallen down a cliff or mountain while trying to cross into France. Others reported deaths from road accidents. More than half of the respondents also said they had experienced racist abuse from Italian citizens. More than a third said they had experienced police violence, including tear gas. An 18-year-old from Sudan said: “It was really bad. They came to me directly and they sprayed me with the gas on my face. I was really in a very bad situation by the riverside in Ventimiglia.” Another man said his shoulder was broken and his neck injured by French police at the border. 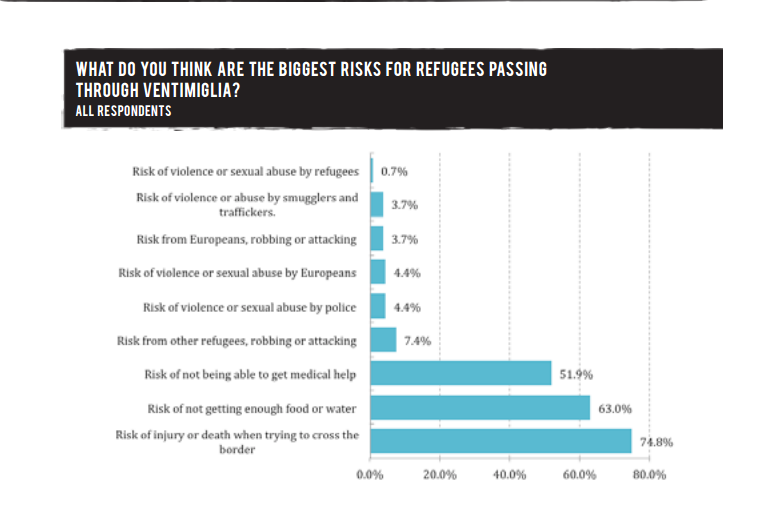 According to the report, the living environment for refugees in Ventimiglia is unsanitary and dirty. More than 85 percent of respondents said they washed in the river, which they also used as a toilet and at times for drinking water. More than half the men interviewed said they didn’t get enough to eat, with many receiving only one meal a day. Many respondents said that they had encountered health problems while in Ventimiglia, which they blamed on the “unhealthy living environment.” Local health care professionals have reported that skin conditions like scabies are widespread.

Refugee Rights says despite the efforts of groups like Medecins Sans Frontieres, medical care for refugees in Ventimiglia is inadequate. "The available resources are simply not sufficient to deal with the current situation."

Looking for the best chance at asylum

The researchers also asked refugees where they were trying to go. Most said the United Kingdom and France. Others wanted to go to Germany, the Netherlands, Denmark and Italy. 60 percent said their main motivation for wanting to go to a particular European country was a belief that they would have a good chance of being granted asylum or protection there.

In the study's conclusion, Refugee Rights Europe calls for the following: