No papers, no home, no future: Homeless migrants in the UK

Asylum Link Merseyside is a charity in Liverpool, England, that helps migrants, asylum seekers and refugees navigate life in the United Kingdom. It seeks to fill a gap by assisting undocumented migrants who are trapped in an endless cycle of poverty.

Caroline* is speaking to a Congolese woman, who is visibly distressed. Caroline floats across the entry way and  gently knocks on the door opposite, where an immigration lawyer is meeting with another client. It's just a few minutes before closing time, but she wants to make sure that the woman can see someone today.

"If someone comes through those doors, you know something is wrong," she says. "Poor thing—she’s exhausted."

Caroline understands what the woman is going through. After all, she is in the same situation. Caroline may be a volunteer at  Asylum Link Merseyside (ALM), but she is also an undocumented migrant herself. Since coming to the United Kingdom from Congo-Brazzaville, Caroline has struggled with chronic homelessness. Even so, she volunteers twice a week at the front desk.

"When I come to ALM, at least I can help some people," she says. "It keeps me from thinking about my own worries."

This mixture of kindness and sadness, lightness and dark fills the rambling presbytery adjacent to St. Anne’s Church that houses ALM. The atmosphere is warm and inviting and there is always someone on hand to offer immigration advice or a steaming cup of tea. But you only have to scratch the surface, or look into the eyes of many of the volunteers like Caroline, to find the heartbreak.

Many migrants feel as if their journey will be over when their feet touch British soil. But for some, like Caroline, the UK is far from the land of opportunity that they envisioned in their dreams.

"It's as if you are running from a bull," says Ewan Roberts, the centre manager of ALM. "You run and run and run, until you reach a stone wall. You climb over it just in time. You sink down on the other side, weak with relief. And just as you catch your breath, you see there is a bull coming at you from another direction. That’s what it is like for migrants starting a new life in the UK."

Life on the streets

Since Caroline arrived in the UK 13 years ago, she has just been trying to survive.

It's hard to tell Caroline’s age, she could be anywhere between 30 and 45. When asked, she says she stopped counting a long time ago. It's not just her age that is hard to pin down. There is something ethereal about her, as if she is not quite of this world.

Her small body floats in baggy black sweatshirt and sports pants, with her hair hidden under a black baseball cap.  Her face is regal, but she looks weary.

She says she was born into a political family in the Republic of the Congo (also known as Congo-Brazzaville), a Central African country that experienced a brutal civil war in the late 1990s and where the government is still tough on the opposition. Caroline, who was involved in political groups herself, fled in the early 2000s. When she arrived in the UK, she applied for asylum. Over the next six months, while her claim was being processed, she scraped by on government allocations of five pounds a day.

But her application was rejected. It's unclear exactly why. However, more than a decade later, ALM manager Roberts looked at her original asylum case and concluded that her lawyer had "made a right mess of it."

After she was rejected, Caroline called her mother, who told her it wasn’t safe for her to return to Congo-Brazzaville. But without papers, she was unable to work in the UK and had no money for rent.

"When you are rejected," she says in French, "You end up on the streets."

Caroline began couchsurfing, staying with one friend after another in London. But eventually, she overstayed her welcome. She left London, seeking out other people in her extended network. She came to Liverpool with a plan to stay with a friend of a friend, but it fell through.

Exhausted and desperate, she sought out a Catholic church. She sank down on a pew at St. Anne's, tears rolling down her cheeks. The priest saw her crying and asked what was wrong. When she explained, he sent her to ALM. 'I'm not living the life I planned on'

ALM hasn't been able to solve all of Caroline’s problems. But it has provided her with community, a bit of stability and a reason to keep going.

She still doesn't have papers or a place to live. But she shows up twice a week to volunteer and is the most regular member of the singing group, where she raises her voice and, for a moment, lets her troubles slide away.

Recently, when Caroline found herself on the streets again, ALM accepted her into one of their emergency housing units.

She says she never imagined her life would turn out like this. Often, she regrets coming to the UK, even though she says she didn’t have a choice.

"No one wants to leave their home," she says simply.

Back in Congo, Caroline says she studied medicine. She also ran a small business and had several employees.

"I had dreams and plans," she says. "But no one knows their destiny. I guess this is mine. But I'm not living the life I planned."

She gazes sadly at the room. Since she came to the UK, she says she has only encountered barriers.

"All of these years, wasted," she says, still staring into space. "Well, not wasted. Maybe someday, I will know why. God will tell me why I had to live like this."

The UK creates a 'hostile environment' for migrants

Since ALM first began in 2001, it has grown exponentially. The charity now has seven employees and offers a wide variety of services, including help for destitute people like Caroline.

ALM reports that, each year, about 200 to 300 destitute migrants come to the charity for help. Many more exist in the shadows. Roberts blames these rising numbers on a set of laws passed over the past five years meant to create a "hostile environment" for undocumented immigrants. Under this legislation, private landlords, healthcare providers, employers, driving licence authorities and banks are all required to verify the immigration status of their tenants, patients, employees and customers.

"So when people are refused asylum, everything is blocked," Roberts says. "They can't get a house or a job. That drives people into a corner."

He says the irony is that the Home Office doesn't systematically deport failed asylum seekers.

"People are told to sign up for voluntary removal, but there is little follow-up," Roberts says. "So, instead of being removed, people are just made homeless."

Roberts estimates that there must be thousands of destitute migrants across the UK.

"People are resilient and they will survive," Roberts says. "They start by turning to friends. But eventually, those options run out. Then, they start doing abnormal things to survive, like dealing drugs and prostitution. What does the government expect them to do? Die?" 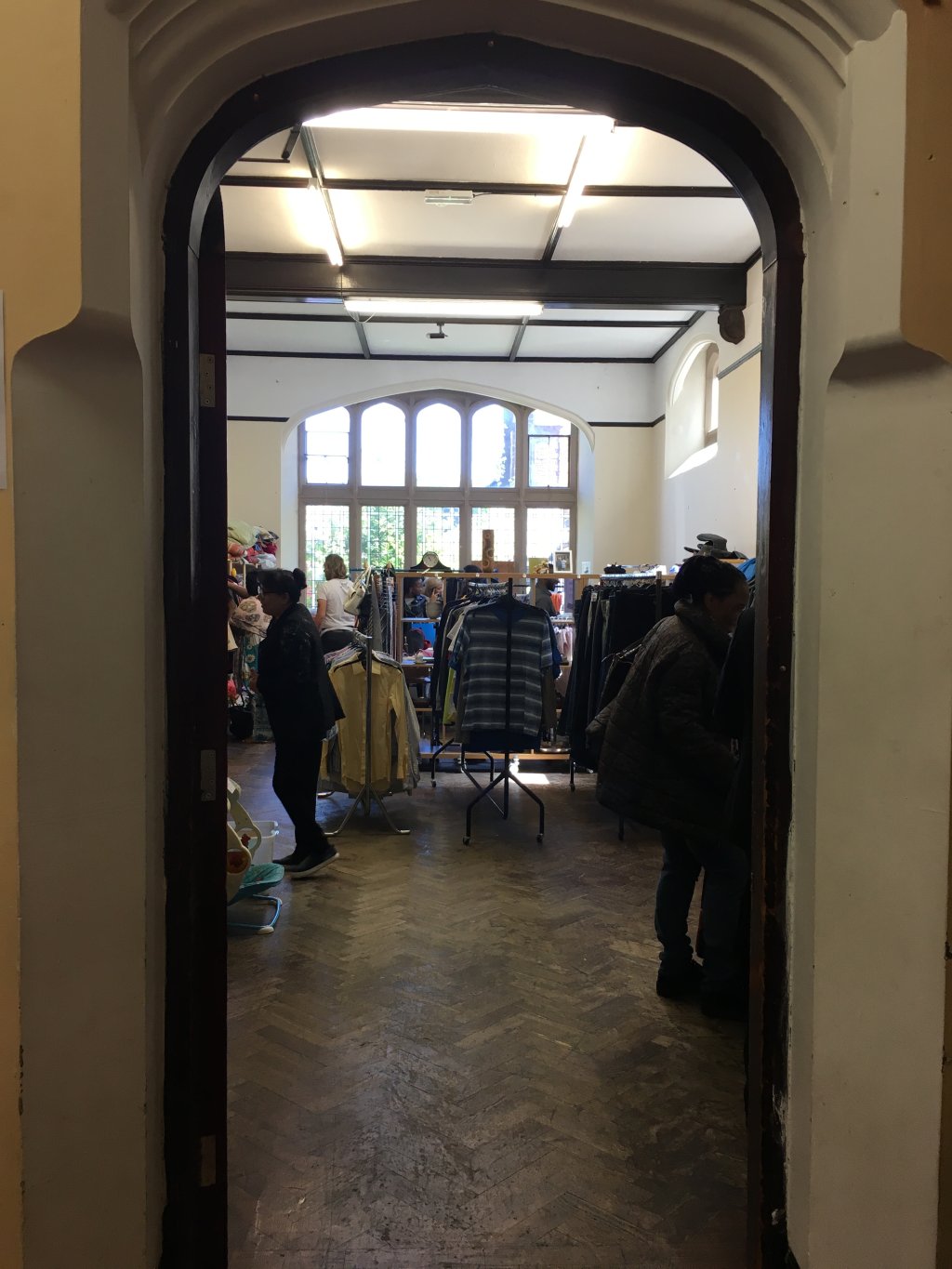 Life in the shadows

For the past 13 years, Caroline has lived crouched in the shadows. In the UK, you can apply for residency after 20 years in the country without papers. In order to qualify, Caroline would need to lay low for another seven years. Seven more wasted years.

Caroline says it feels as if she is living in a prison. Without papers, she can't leave the UK. In late 2017, her mother, who she calls her best friend, died. Caroline couldn't go back for the funeral.

"It broke Caroline," says Roberts, who knows her well. One day, earlier this year, he went to pick her up for an early morning meeting. Caroline was just getting back from a long walk. It was 5am, cold and still dark.

Still, in the past weeks, Roberts feels as if Caroline has turned a corner. ASL has been working on starting a new asylum case for her. Roberts has caught her smiling a few times. And even laughing. He hadn't seen that for a long time.

Caroline herself says that, lately, she's felt a presence hovering over her. An energy that forces her to get up in the morning. To go out the door, even if she is sad.

She says she knows it is her mother, telling her to be strong, to keep fighting.

* InfoMigrants has changed her name to protect her identity.