What are the advantages of working legally in Germany?

Though illegal, many people still resort to working under the table to avoid paying taxes. But did you know that working legally has many benefits, such as a money for retirement and health insurance?

In Germany, "black labor" is a term used for illegal, under the table work. This means that the work is not taxed and does not contribute to social security. Black labor is widespread, even though it is considered an "economic crime" in Germany that is punishable by law.

The reason some people, including asylum seekers and refugees, may be engaged in under the table work is that they might not know that it is illegal. In addition, they might not know about the many benefits of working legally in Germany, says lawyer Zemfira Dlovani. She is an expert on labor rights and spoke to InfoMigrants about the perks of working in Germany legally.

Dlovani doesn't see any benefits to working illegally in Germany. Not only is it a crime punishable by law, but if a refugee is caught by authorities it might cost more money than they made at the job.

Working legally can also improve chances of staying in Germany. If an asylum seeker works enough to cover 75 percent of his expenses and reaches a German level of C1 on the ECFR, they can receive a three-year-long residence permit to stay in Germany. Here are a few of the other benefits:

In Germany, when someone works legally, they have the right to turn to the judicial system if the employer fails to pay way their wage or salary for any reason. Working illegally does not grant the worker the same privilege to recover lost earnings, as confirmed by the German Federal Court in 2014.

In Germany, there are often judicial cases where employers failed to pay their employees. Dlovani, in her experience, say that refugees who work illegally often do not report to the Labor Office that their employer has missed a payment, because they are afraid to get into trouble with the Labor Office. 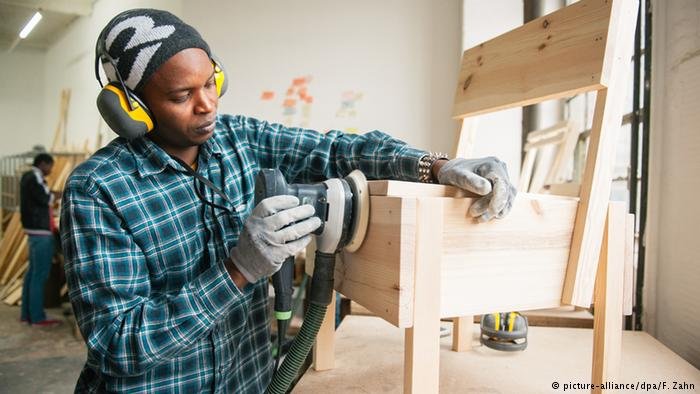 A legally employed person in Germany also pays half of their half insurance for the employer, and the employer contributes the other half. Members of the employee's family are also covered by the insurance.

Salaries continue to be paid to those who work legally in the event of illness or some type of accident. This paid sick leave can extend to a maximum of six weeks.

Protection from being unfairly dismissed

Dlovani says that when a worker is employed legally, an employee cannot be fired or dismissed without a valid reason. There are certain legal procedures such as giving you advanced notice, that need to be followed before your employment is terminated. You can read more here:  https://bit.ly/2LtIpMX

Adherence to the minimum wage

In Germany, the minimum wage is € 8.84 Euros an hour and it is illegal for any employer to pay lower than that. Yet, those who work illegally often get exploited and are not paid the minimum wage.

Nature of the work

In Germany, one can do any type of work they want as long as they have experience and qualifications. High-paid work can only be done legally.  Dlovani said that most under the table work is in a kitchen or a form of service where the worker can not improve their language skills or integrate into society.

Working legally also sets a good moral example for children to follow. "This is the first point one should think of before working illegally," Dlovani said.

Translated from Arabic by Wesley Dockery