The ship Aquarius, carrying over a hundred migrants rescued at sea, has reached Spain after being rejected by Italy. The case highlights rifts in the EU over how to deal with huge numbers of people fleeing to Europe.

The migrant rescue ship Aquarius arrived in the eastern Spanish port city of Valencia on Sunday after a long voyage through the Mediterranean forced on it after it was denied   a safe harbor by Italy and Malta.

It was carrying 106 of the 629 migrants it rescued from the Mediterranean, according to the Italian news agency Ansa.

The two EU countries' rejection of the migrants, who were rescued at sea while undertaking the perilous trip over the Mediterranean from Libya, has underscored deep divisions in Europe on how best to handle a recent massive influx of migrants attempting to reach the continent.

Spain, which declared its willingness to accept the ship on Monday, has said it would treat the migrants "totally normally" according to current EU rules.

That could mean the expulsion of those people who do not have a legal right to claim asylum.

Every migrant "will know if he has refugee status, if he is an economic migrant, and also, indeed, if he is guilty of certain offenses that make him liable to expulsion," she said. Spanish officials plan to do a case-by-case analysis of the migrants' requests for asylum.

According to the Dublin Regulation, migrants can apply for asylum in the first EU country they enter. If their application is rejected, they can be returned to their country of origin if it is deemed safe by authorities. 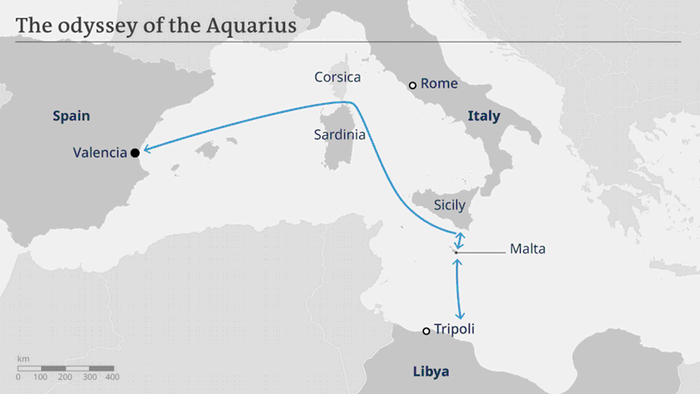 A rescuer on board the Aquarius has slammed the decision by Italy to send the ship on, which inflicted a further 700-nautical-mile (1,296-kilometer) trip on people who were already traumatized and in some cases injured after spending 20 hours on the open sea in overcrowded rubber dinghies.

"We have the most vulnerable of the vulnerable on the ship right now, and instead of being taken care of and supported, they're being used ... for some idiotic exercise of political influence," Max Avis, the deputy search-and-rescue chief on the ship, told the Reuters news agency.

More than 120 unaccompanied minors and seven pregnant women are among those who have spent days crossing the western Mediterranean, according to officials in Valencia.

Health officials, emergency workers and psychologists were called up to be on hand at the city's marina.

Spain announced on Saturday that it had accepted an offer from the French government to take in any migrants who want to go to France "once they have fulfilled the protocols established for their arrival."

Prime Minister Pedro Sanchez "appreciated the cooperation of [French] President [Emmanuel] Macron and believes this is the framework of cooperation that Europe should use to respond" to the migration crisis confronting Europe, the Spanish government said in a statement.

Read more: Opinion: The problem is populism, not just Italy

The Aquarius was sent away by Italian Interior Minister Matteo Salvini in an apparent bid to establish his new government's anti-migration credentials. Salvini himself is from the anti-immigration and euroskeptic League party.

The incident comes as increased migration to Europe has fueled the rise of anti-immigration parties across the EU.

Nearly 800 people have died this year while trying to cross the Mediterranean, according to the International Organization for Migration. Two young men traveling on the dinghies involved in the rescue by the Aquarius eight days ago are still missing, and believed drowned.

Many of those undertaking the journey are fleeing from conflict or poverty at home.