The school for children from faraway (Part 2)

In school for the first time

Charles, Trésor, Ssetou and Mamadou-Dubai are just four of the many children and teenagers who immigrate to France each year. All kids in France -- no matter what their immigration status -- are required to attend school until they are 16. That means the French national education system has to find a way to integrate students who might not speak French or who may never have attended school before.

Maëva Poulet
Follow
More than 52,000 immigrant children go to school in France. Many of them struggle with the language in their new country. To help them, the government has put in place transition classes known as UPE2A (“pedagogical units for arriving foreign-language children”). In these classes, kids are able to improve their French-language skills and get used to the French public school system. The aim is to enable the students to catch up, allowing them to integrate into regular classes in just a few short months. InfoMigrants went to Val d’Oise, a department north of Paris, to check out how the system works.
Students in Paloma Vuillerminaz’s class in Villiers-le-Bel in Val d'Oise. (Photo: Maëva Poulet)

At Martin-Luther King junior high in Villiers-le-Bel, in the Val d’Oise department, there are 15 students enrolled in a special class for migrant children who have had little or no formal schooling (in French, this special section is known as a UPE2A-NSA). Their teacher Paloma Vuillerminaz helps them learn to read and write in record time so that they can integrate into “normal” classes with their peers as soon as possible.

“Who is going to come and write the date on the board? Come on, Ssetou!” Paloma Vuillerminaz, a French teacher and director of this special section at Martin Luther King Junior High in Villiers-le-Bel, hands a whiteboard marker to the young Malian girl.

Standing in front of the whiteboard with eyes firmly fixed on the floor, Ssetou looks a little lost.

Paloma points to a calendar next to the whiteboard.

“The year!” yells a second.

The teacher just has time to congratulate her before the class breaks into applause.

Ssetou started at this school in February. She speaks French, but reading and writing are new challenges for her.

Vuillerminaz’s class is what is known in French educational jargon as a UPE2A-NSA, a special section for migrants students who have had little or no schooling prior to their arrival in France.

Currently, she has 15 students, between the ages of 11 and 14. All of them have backstories.

“They have never been to school and eight of them don’t speak French,” says Vuillerminaz.

When these students arrived in France, they took placement tests. School officials recommended that these students be placed in this special section for children who have had little or no formal education.

>> Check out the first article in our series

In France, close to 90% of foreign-language speaking children get support within the educational system. Either they are enrolled in special sections, known as UPE2A-NSA (for students who have had little or no formal schooling) or UPE2A (for students who went to school in their home countries but don’t speak French well enough to enroll directly in a French school), or individualised support, according to a note by the Ministry of National Education from 2015. An estimated 91% of foreign-language speaking students at the junior high level are enrolled in a special section. 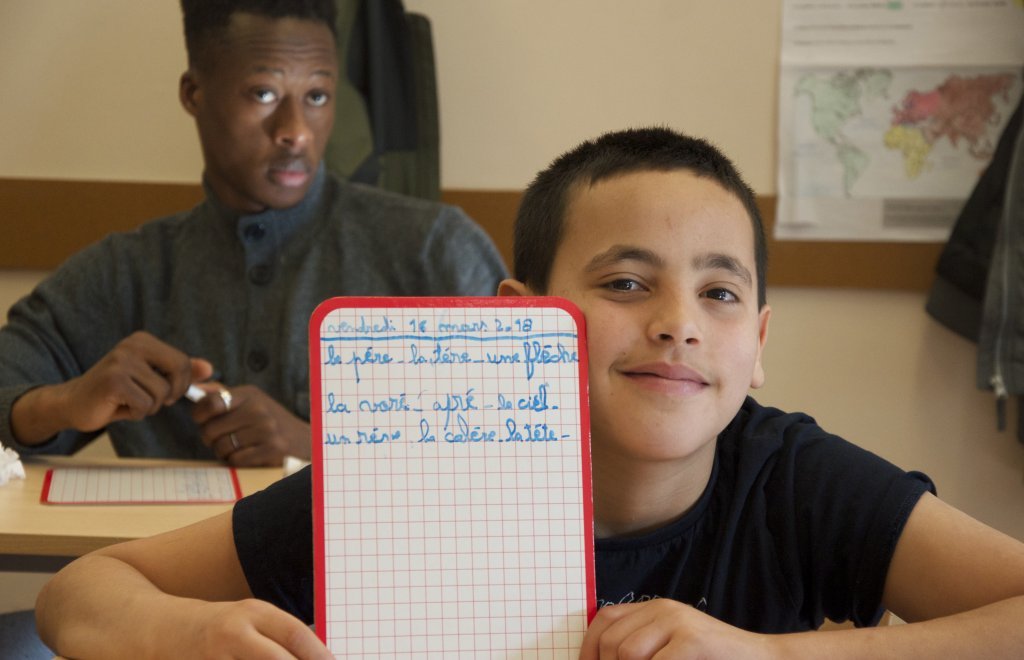 Like Ssetou, many of the students join the class in the middle of the school year.

"That’s one of the particularities of this section. Students join all throughout the year depending on when they arrive in France. That said, we cap the classes at 16 students,” Vuillerminaz says.

In the class, the students spend 18 hours a week in intensive French lessons.

On this Friday, Vuillerminaz, who is originally from Argentina, starts the class with a dictation exercise focusing on the French sounds “é” and “è”.

Mamadou-Dubai, a tall boy with a determined gaze, takes the exercise very seriously.

After listening hard, he’s written the French words for father and earth, “Le père, la terre”, on his chalkboard in perfect French. While still in his native Ivory Coast, Mamadou-Dubai attended a few reading and writing classes in a church. He is one of the most advanced in the class.

His neighbors, Mohammad-Gul and Shazem, write down the sounds they hear out of order. From Afghanistan and Pakistan respectively, the boys don’t speak French and still have everything to learn.

Aziz, the class clown, pipes up, asking if she just said “haleine,” which, in French, means “bad breath”.

“No, but it is pronounced the same, you are right,” she says. “Who can explain the difference?”

Vuillerminaz is accustomed to lots of questions.

“When we do an exercise, there is often a word or a concept that the students don’t know, so I take the time to really explain everything,” she says. “The students who are more advanced get the chance to help their classmates.”

She has a computer hooked up to a projector. So, when she needs to, she can show her students photos and videos to help explain concepts.

Students work together on an assignment. Photo: Maëva Poulet

Before morning recess, someone knocks at the door. The students rise as a sign of respect.

It’s the school nurse. From the smiles on the kids’ faces, it is easy to see that they know her well.

“Next week, I’d like it if you could all bring me your health and immunization records. Do you know what those are?” she asks. “I’m not going to jab any of you but, just so you know, there are obligatory vaccinations in France. We’ll talk to each of you individually.”

The students in this classroom receive special support and are monitored closely.

“These kids are vulnerable and many of them have difficult home lives,” says Yannick Thomas, the junior high principal. “For example, many of them live in hotels with their families. There are also some unaccompanied minors -- though those kids usually get a lot of support from staff in their group homes.”

The school nurse plays a very important role. Take this winter for example. It snowed and some students didn’t even have coats! So we picked up some clothes at the Red Cross and let the students try them on and choose what fit.”

The school also got financial support so that the kids can eat in the school cafeteria. They can also take public transportation for free -- since some of them come a long way to attend this special section.

At 11:30 a.m., math teacher Sofiane Boussaadouna comes to Room 202, the classroom reserved for this special section.

“Even if learning French is the number one priority, the students are also required to take three hours of math a week, two hours of history and geography and one hour of English,” says Vuillerminaz. 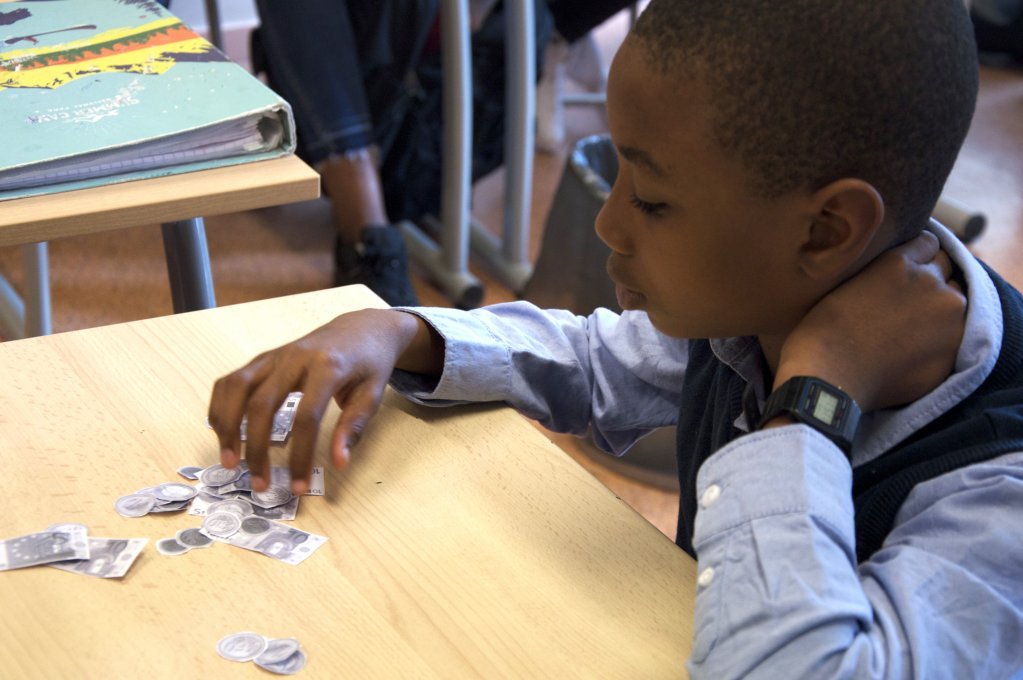 Boussaadouna starts his class by handing out fake money.

“Get into groups of two. One is the salesperson, the other is customer, ok?” he says. “Salespeople, you are selling shoes for 17,34 euros. Customers, pay with your 20 euro bill. Now, be careful to check your change!”

The exercise is fun, but it involves real life skills.

“Math is a new subject for them. I try to teach them the basics by using real-life situations,” Boussaadouna says. “Some of them already have the skills to keep up in a more advanced class, but the challenge is to build a class that works for as many of them as possible!”

Math class also represents an hour-long break for the students. When they finish up, they’ll have four more hours of French class with Vuillerminaz. It’s an intense schedule but necessary when they have so much to catch up on.

“Students who already went to school in their own countries learned methods of learning and memorization,” Vuillerminaz says. “But some of these kids never went to school at all. Some have to start with learning how to hold a pen correctly.” 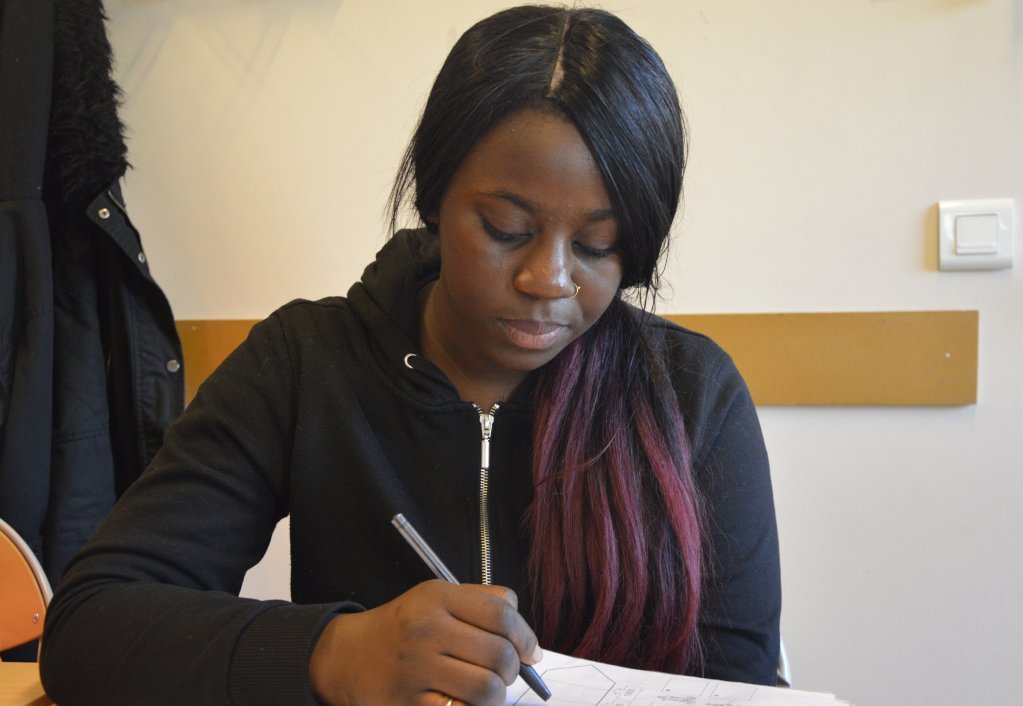 As the junior high students return from lunch, laughter rings out in the hallways. A few classroom monitors raise their voices to chastise students who are yelling in the stairs.

The excitement of the junior high hallways stands in real contrast to Room 202, where the students are quiet and studious.

“It’s really nice to work with these students. They have incredible determination and feel very lucky to be attending school in France,” Vuillerminaz says.

She says that even though this small section is housed within a normal junior high, her students don’t spend much time with the other kids.

The students know that their time in this class is just temporary. Depending on their age, some will be able to attend for two years, others just one.

“The kids in this section who are 11 or 12 still have time,” Vuillerminaz says. “They will have to work hard, but they should be able to integrate into a normal classroom”

She worries more for the older kids who will have to start thinking about the next step.

"The 14-year-olds will have to start figuring out a direction for next year,” she says. “That’s another challenge.”

The last national statistics on UPE2A are from the 2014- 2015 school year, when 52,500 foreign language speaking students were attending French public schools. More than half were in secondary school.

No matter how much schooling they’ve had in the past, 75% of these students will start in a UPE2A. At the junior high level, the number is even higher, with 91% of foreign-language students starting with a UPE2A class.

The demand for these classes is growing. According to a report from the National Assembly, their number increased by 20% between 2010 and 2015. However the demand isn’t the same all across the country. In the Val d'Oise department, for example, there is a high demand. An estimated 1% of students are foreign-language speakers who need UPE2A support. In fact, it has the third-highest number in France, coming just after Seine-Saint-Denis and Paris, where 1.5% of students were integrated into UPE2A classes.

- If you have arrived in France from another country and you have a child over the age of 11 who you want to enroll in the French public education system, you should get in touch with the CASNAV in your district. They will be able to give you information about how to enroll and set up an initial appointment.

A guide to all those tricky acronyms:

- CASNAV: The body in charge of orienting and evaluating migrant children between the ages of 11 and 16. (Acronym for “Academic Center for the Education of New Arrivals and Traveler Children” in French)

- MODAC: The body that provides educational support and direction for minors over the age of 16. (Acronym for "Welcome and Support Center for children over the Age of 16" in French)

- UPE2A: Structures set up in both primary and secondary schools for children recently arrived in France who speak little or no French to help them gain the skills needed to integrate into a regular curriculum. (Acronym for "Pedagogical Unit for Foreign-Language Speaking Children" in French)

- UPE2A-NSA: Structures set up in both primary and secondary schools for children recently arrived in France who have had no or little access to formal education. (Acronym for "Pedagogical Unit for Foreign-Language Speaking Children who have Not Been Educated Before")

- CIO: These centers, which are run by the Ministry of National Education and help to orient and evaluate migrant children within the national education system, exist across France. (Acronym in French for "Centers for Information and Orientation")