When you are gay and African, sometimes your only choice is to flee

Charlotte Boitiaux
Follow
Camara, Diawara, Yassin and Farid were all born in countries where homosexuality is considered shameful, taboo and sometimes even a crime. Camara is from Mali, Diawara from Guinea and Yassin and Farid are from Morocco. When their secret was discovered, all four of them fled their home countries -- afraid of ending up in prison and terrified about what their friends, family and neighbors might do to them. Today, these four are all seeking asylum in France. InfoMigrants met them through Le Refuge, an organization that helps LGBT people who find themselves isolated. Le Refuge is providing these four men with a roof over their heads and psychological support while their asylum claims are being processed.

They never say the word "gay." Instead, they dance around it, saying “people like me” or “my community”.

Yassin*, a 27-year-old from Morocco, is still uncomfortable with his sexuality. For many people in his country, being gay is shameful -- a taboo and a dishonor that will bring shame upon the family name.

Since childhood, Yassin knew that he was different from other boys, but he refused to talk about that difference for years.

Yassin nervously twists the ring on his finger.

"Then, one day, I understood and, when I understood, my first thought was that I was a sinner in front of God,” he said. “My entire upbringing and education revolved around religion”.

"[For a long time], I didn’t tell anyone that I was like that,” he said. “You have to understand that, before, I was a believer. I was trying to find some kind of compatibility between God and what I was.”

Yassin knew that his observant, conservative family would never accept that he was "different".

When Yassin was 25, he moved to Marrakesh for his studies. For the first time in his life, he started to feel a bit more free to be himself.

That’s when he met Farid*, the man who would become his boyfriend, online. In Morocco, homosexuality is criminalized under article 489 of the penal code. The gay community in Morocco is hidden, but it exists.

"There is a sort of gay 'darknet' in the country", says Yassin, laughing. "We have fake Facebook accounts and fake profiles. We are very careful. In Morocco, there is an entire world in hiding.”

After chatting for several months online, the two boys decided to meet. It was September 2015 and Yassin’s family was out of town. The house was empty -- the opportunity was too good to pass up.

It was love at first sight. Yassin was 25, Farid was 20. They spent an entire, blissful week together, locked away from the world between the four walls of the house. It was a happy but short interlude.

Farid*, sitting next to Yassin, listens to him and smiles.

"It was good, that period,” he says, looking lovingly at his boyfriend.

Farid is slender, beautiful and effeminate. It’s easy to understand the nightmare that was his daily existence in a country that puts so much emphasis on virility and masculinity.

This delicate boy attracted attention, stares. When he was 15, a group of men tried to rape him in the middle of the street, somewhere near Marrakesh.

"They tried to do things to me with their hands, it was horrible,” he said. “And no one tried to help. No one ever does.”

*The names in this story were changed

For an hour, Farid describes his teen years, filled with humiliation, insults and threats. When he came out to his family in 2011, he was 16. His family threw him out.

He lived with his grandmother for some time before he decided to recant.

"My uncles were pressuring me too much,” he said. “So I withdrew my confession.”

His father agreed to take him back if he started undergoing therapy to "cure his homosexuality”.

"The psychiatrist drugged me with medicine,” he said. “He told me to pray every time I thought about a man…"

At school, he stuck out like a sore thumb. He was harassed and insulted constantly.

"There are more and more of you," his classmates sneered.

Farid kept his head down and didn’t respond.

"What else could I have done?", he added, laughing nervously again. "I didn’t have any friends. That’s just how it was." 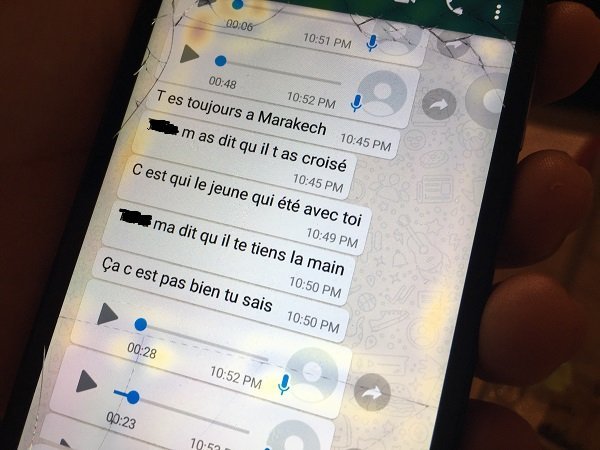 Tweets (in photo above), translated from French:

"Are you still in Marrakesh?"

"Who was the guy you were with?"

"That’s not good you know"

His 2015 meeting with Yassin changed everything.

The two boys were deeply in love and offered each other support. They had both moved to Marrakesh to study. They moved in as roommates -- just like any other Moroccan students.

"We never slipped up… except for once,” Farid said.

One night, the couple was returning home. It was already after midnight and the streets were deserted. In the darkness, they grabbed hands.

In a stroke of terrible luck, they ran into one of Farid’s cousins.

The news spread like wildfire around Farid’s family. His phone started blowing up with texts and WhatsApp messages.

"I found out that my father had come to Marrakesh to find us,” Farid said. “He filed a complaint against me.”

The couple moved to another neighbourhood. But then, Yassin’s family started threatening them.

"At first, they came to visit me," Yassin said. "They knew that I had a roommate. But my sister started to get suspicious. She started telling the entire family that I was gay. They accused Farid of sorcery. They accused him of bewitching me, of cultivating homesexuality within me. They also threatened to file charges".

"Luckily, I had a scholarship, so I was financially independent," Yassin says. "I didn’t have to move back home.”

But a few months later, in September 2017, Farid and Yassin were threatened again. One day, their landlady and their neighbors tried to break down their door.

"I heard yelling, people screaming ‘dirty faggots’. We were terrified. We never understood how they figured it out. We didn’t let anything slip," Yassin says.

The couple called the police. The police ended up being the opposite of helpful.

"Our landlady told the cops that we were gay," Yassin said. "The police commissioner burst out laughing. He refused to file our complaint."

The day after the incident, two policemen showed up at the couple’s home.

They handed Yassin and Farid an urgent summons to report to the police station.

"That’s when we realized that we had reached a dead end,” Yassin said. “We would have to flee.”

Camara and Diawara come from two different countries, but their stories are parallel. Camara is 25 and he’s from Mali while Diawara is 28 and is from Guinea. After meeting in France, the two men are now in a relationship.

In a voice barely above a whisper, Camara begins the story of his ordeal. He stares straight ahead and keeps his arms crossed tightly across his chest.

"Being gay in Mali is like being the devil,” he begins. Like Yassin and Farid, Camara’s deepest struggle has been with his faith. Starting when he was just a teenager, he felt crushed by the weight of religion.

"In my mind, I was constantly telling myself that I was a criminal, betraying Islam," he said.

He started understanding that he was attracted to men when he met a boy slightly older than him in Bamako.

"We played football together, we’d walk around together,” he said. “I adored him. Then, one day, he started going out with a girl. I was incredibly jealous. That’s when I realized.” 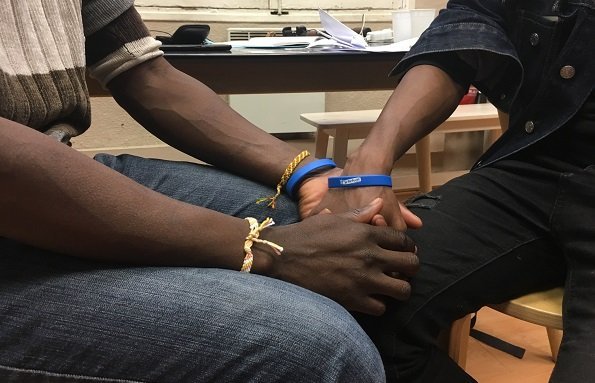 Diawara, who is sitting next to him, says his adolescence was similar.

He also realized early on that he wasn’t interested in girls.

“I was living in Conakry,” he said. "I remember that we went to swim in the river and I was looking more at the boys than the girls. Later on, my sister started getting suspicious. One day, she caught me in a nightclub in Conakry that had the reputation for being a gay hang-out. That night, I had to insult my friends and slur gay people to make her believe that I was heterosexual."

But the pressure just increased. Diawara’s family wanted him to get married and didn’t understand his reluctance to commit.

"One day, my cousin came to see me and he said, ‘I’ve realized some things about you and I’m not happy about it,’” he remembered.

At the time, Diawara was secretly dating another boy. His boyfriend told him to tell his family that he wasn’t ready to get married and that he wanted to get a job before settling down.

"That didn’t work,” Diawara said. “My aunt told me, ‘Either you get married or you leave.’”

In Mali, Camara was also living a secret life.

When he was 17, he fell hopelessly in love with a man -- an artist, a painter.

The man, who was 22 at the time they met, was already married and had a daughter.

"A few months after we met, I sent him a text admitting my feelings for him," Camara said. "He was also gay but he was terrified that I was setting a trap for him. So he asked me a lot of questions before letting me into his life."

The two men became lovers and began to see each other in secret.

“For four years, he was my only love,” Camara said.

In Mali, homosexuality isn’t a crime but the population, which remains largely hostile to the LGBT (lesbian, gay, bisexual, transgender and intersex) community is capable of worse.

Recently, some Malians have taken to social media to call on people to "hunt down gays." There are also anti-gay groups.

“We knew what was at stake if we were discovered,” Camara said.

One night in January, the couple’s secret world exploded.

“I had a party at my house with lots of friends,” he said. “We were all drinking a lot. When the guests left, my boyfriend and I, we started kissing on the couch. But one of my friends came back because he had forgotten his bag. He saw us. He didn’t say anything, he just left.”

Camara was overwhelmed with panic.

"I knew that he was going to denounce us,” he said. “I told my boyfriend that I would have to flee.”

In Guinea, Diawara was also caught in the act.

"I was spending the night at my boyfriend’s house when his brother came over without warning,” he said. “He saw us in the same bed and he just went crazy.”

Diawara managed to escape but his boyfriend was savagely beaten by his own brother.

Diawara managed to secretly visit his boyfriend in the hospital. As he sat by his bedside, his boyfriend told him to flee the country.

Diawara was terrified of what his community might do to him. He was afraid of mob violence, lynching.

"That happens a lot in Guinea,” Diawara said. “A crowd gathers around you in the street and someone decides your fate. I think that I easily could have been killed for my homosexuality."

Fearing for their lives, Yassin, Farid, Camara and Diawara all decided to flee their home countries. They were not yet 30 years old. All of them set off for France, where they prayed they’d find asylum and respite.