When you are gay and African, sometimes your only choice is to flee

Charlotte Boitiaux
Follow
Camara, Diawara, Yassin and Farid were all born in countries where homosexuality considered shameful, taboo and sometimes even a crime. Camara is from Mali, Diawara from Guinea and Yassin and Farid are from Morocco. When their secret was discovered, all four of them fled their home countries-- afraid of ending up in prison and terrified about what their friends, family and neighbors might do to them. Today, these four are all seeking asylum in France. InfoMigrants met them through Le Refuge, an organization that helps LGBT people who find themselves isolated. Le Refuge is providing these four men with a roof over their heads and psychological support while their asylum claims are being processed.

The four young men took different paths to France. Camara and Diawara faced hell on earth in Libya and then crammed into boats that barely made it across the Mediterranean. Farid and Yassin had the luck and the means to come to France by plane. All four of them ended up in the southern French town of Montpellier, where they are being helped and supported by Le Refuge, an association that helps young gay people who find themselves alone and isolated.

After a friend walked in on Camara and his boyfriend kissing, Camara didn’t wait long to flee Mali.

The next day, Camara asked his lover for help getting to the border.

"He drove me all the way to Burkina Faso," Camara says. "Then, he had to turn back, feeling as if some of his soul had died. He left me there at the border."

Camara crossed from Burkina Faso into Niger, then onto Libya. He stayed there for several months, working, before he attempted the Mediterranean crossing. He made it to Italy. He would stay there for two years, but it wasn’t his final destination.

"I didn’t want to stay there -- I wanted to come to France where gay marriage is legal," he said. "Here, it is easier to live with a man."

Camara ended up in Montpellier, a town in the south of France, a bit by chance.

"I had a Malian friend living here who let me stay at his place,” Camara said. "But he didn’t know that I was gay."

His friend was not happy when he found out.

Camara found himself on the streets.

He sought help with a local group that offers support to migrants. They told him about Le Refuge, an organization that helps gay people in distress.

"They told me that it was an LGBT association and that it’d be better for me," he said. 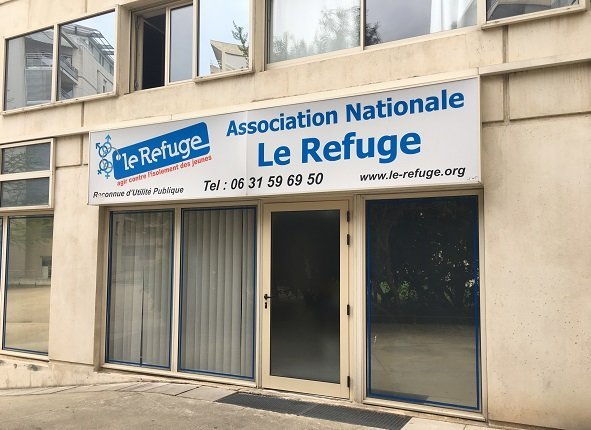 Le Refuge, which was launched in 2003, has 18 different branches across France. They offer support to young LGBT people in distress, many of whom get kicked out by their families after they come out.

At the beginning, the association focused on young people in France. It wasn’t until 2014, the year when the number of migrants coming to Europe exploded, that the association started opening its doors to foreigners.

"For the past three years, we’ve been facing a huge demand for help by gay migrants," says Frédéric Gal, director of the association. "This a new situation for us, one that came about since the migration crisis.”

The French Office for the Protection of Refugees and Stateless Persons (OFPRA), which is responsible for making decisions about asylum cases, confirmed that the number of claims made by gay asylum seekers has increased.

"Asylum claims based on sexual orientation are on the rise in France,” says Pascal Brice, the director of OFPRA. "We don’t have specific numbers because we don’t have the right to collect that kind of data in France, but I can say that the number of claims has been increasing since 2013. Most are from Africans. Our agents give these cases special consideration.”

Le Refuge helps young LGBT people in need by providing them with psychological and social support and accommodation. In Montpellier, the organisation has 12 spots available in apartments in different locations in the city. Currently, half of the homes are occupied by foreign nationals while French citizens represent the other half of residents.

Camara, Diawara, Farid and Yassin are all currently living in housing provided by Le Refuge. The association is also housing a man from Mauritius and another from Cameroon.

"In 2016, 14 percent of the young people housed by Le Refuge were asylum seekers. In 2017, they represented 28. The number has doubled!” says Gal, the association’s director.

Why have the numbers increased so dramatically?

"It’s hard to know exactly why” Gal says. “Maybe other organizations have become better at pointing gay migrants in the right direction. Perhaps we are also getting better at finding people. When you type ‘gay housing’ into Google, our name pops up".

Le Refuge doesn’t limit their welcome to asylum seekers. They have also housed refugees as well as so-called dublinés, or migrants who are set to be transferred back to the first European country where their fingerprints were recorded [under the 2013 Dublin Regulation].

They’ve also housed people whose asylum applications have been rejected.

"We’ve had to adapt to the current situation,” says Gal. "The stories that these people tell us are violent, definitely more violent that those we are used to hearing. These people are punished twice over: condemned by both by their families and under the law [of their home countries].”

When they receive a request for housing, staff at Le Refuge always interview the applicant.

"We aren’t trying to ‘verify’ if someone is gay or not, but we do make a judgement on the credibility of their stories," says Gal. “Why? Because we want the identity of our organisation to remain clear. We are here to offer help and support to gay people. If people with other needs come to see us, we try to point them towards other associations."

As it stands, Le Refuge can’t even provide housing to all of the LGBT people who knock at its doors.

"We can’t offer housing to everyone, alas,” he says. “When someone who is sleeping rough comes to see us, sometimes we are able to find housing for them through other branches of our organisation, in other cities.”

"We try to help the Guineans, Malians and Moroccans understand that, in France, you can say the word ‘gay’ without getting beat up,” Gal says. “We are dealing with very vulnerable people who need to find their bearings and understand different social norms. They have to rebuild their understandings of themselves. It’s enough to make you dizzy.”

Morgane, an employee at Le Refuge, says that the organisation isn’t just about housing. It is also about support.

“Every week, our young residents have to spend time with volunteers at Le Refuge,” she says. “We are there to listen to them and help them to accept themselves for who they are.”

"Here, I learned that I wasn’t sick,” said Camara, who is still waiting for an interview date with OFPRA to go over his asylum application. “I learned that homosexuality isn’t a choice. Before, my friends said that I was contagious. Not long ago, I called my mom to tell her. But she told me that she never wants to see me again. My sister told me the same thing."

"I’m really happy to have met Camara and I’m happy to be able to say it without being judged", says Diawara, who is also seeking asylum.

Like Diawara, Alpha* is also from Guinea. He’s also being housed by Le Refuge and depends on its support.

After being abused and tortured, Alpha fled Conakry in 2016. He’s still waiting for a ruling on his asylum claim.

"I can’t sleep anymore, I have a lot of nightmares,” says the young man. “I have trouble spending time with others. When I go out into the city in Montpellier, I’m afraid. When I see a group of black people, I’m careful, I’ll cross to the other side of the street. I’m so afraid that someone will recognize me and start hitting me.”

Like Alpha, Farid is on antidepressants. Slowly, he’s piecing himself back together in the studio where he now lives with Yassin. The messy interior looks like a typical apartment belonging to boys in their twenties.

The bottles of pills that Farid swallows every day are stored on a small shelf below the television -- which the boys leave switched on. In its prominent position, the TV seems to dominate the room.

"We haven’t really settled in yet,” says Yassin, with a glance to the small balcony, where shoes and old furniture are piling up.

"We’ll only be here for awhile,” he says. “We hope to vacate the apartment when we get refugee status, so that other young people can take advantage of it.”

The couple was lucky -- they were able to get housing quickly through the Refuge.

"When we fled Morocco, we contacted all of the associations that we could find online that help gay people,” Yassin said. “We sent emails all over the place!”

Le Refuge was the first association to respond. The boys didn’t hesitate. After requesting and obtaining tourist visas for France, they bought two tickets and went to the airport.

Farid and Yassin now hope to build lives for themselves in France.

"We filed a claim as a couple,” Farid says, holding up the file full of the proof he gathered of their persecution. “Proving that you are gay is hard. But proving that you were harassed for being gay is easier.”

He has threatening texts and WhatsApp messages. He even has a video showing Yassin being attacked in front of Marrakesh University.

"The OFPRA official who interviewed me couldn’t listen to me anymore,” Farid says, laughing harder. ‘I think at one point, he said: “It’s fine, stop talking, I believe you!’”

The boys are consumed by laughter. Then Yassin speaks, his tone serious.

"I asked for protection in France, but I am not a free rider,” he says. “I’m not here to take advantage of French people’s money. I want to go back to my studies and find an apartment. I want to thank France for helping me when my country failed me.”