Julia Dumont
For a little over a year now, a solidarity movement out of Briançon (Hautes-Alpes) in France has been involved in aiding migrants arriving from Italy. But migrant repatriation to Italy is increasing and several volunteers are being prosecuted.
The Solidarity shelter, designed to house 15 people, often hosts dozens of migrants | Credit: InfoMigrants

It’s 8 in the evening, when a car pulls over in front of the building that houses the Refuge Solidaire, not far from the Briançon train station in the Hautes-Alpes. Xavier Duclaux, an 80-year-old driver, had crossed paths with three young black men on his way back from the Sunday mass, and offered them a ride.

"I found them at the level of Alberts (an area located a few kilometers from the Italian border). They were shocked and looked completely lost so I picked them up and brought them here. They are Malian and Ivorian,” the old man explains. For him, helping migrants in need is unquestionable.

The three young men warmly thank Xavier. They look exhausted. They do not believe that their journey has finally reached an end and barely utter a few words in a low voice.

Arrivals like this are common at the Refuge. Since it opened in July 2017, the place has welcomed hundreds of people and always operates at full capacity. Originally planned to host fifteen people at a time, it regularly receives dozens of migrants. Last week, 150 people were staying there. 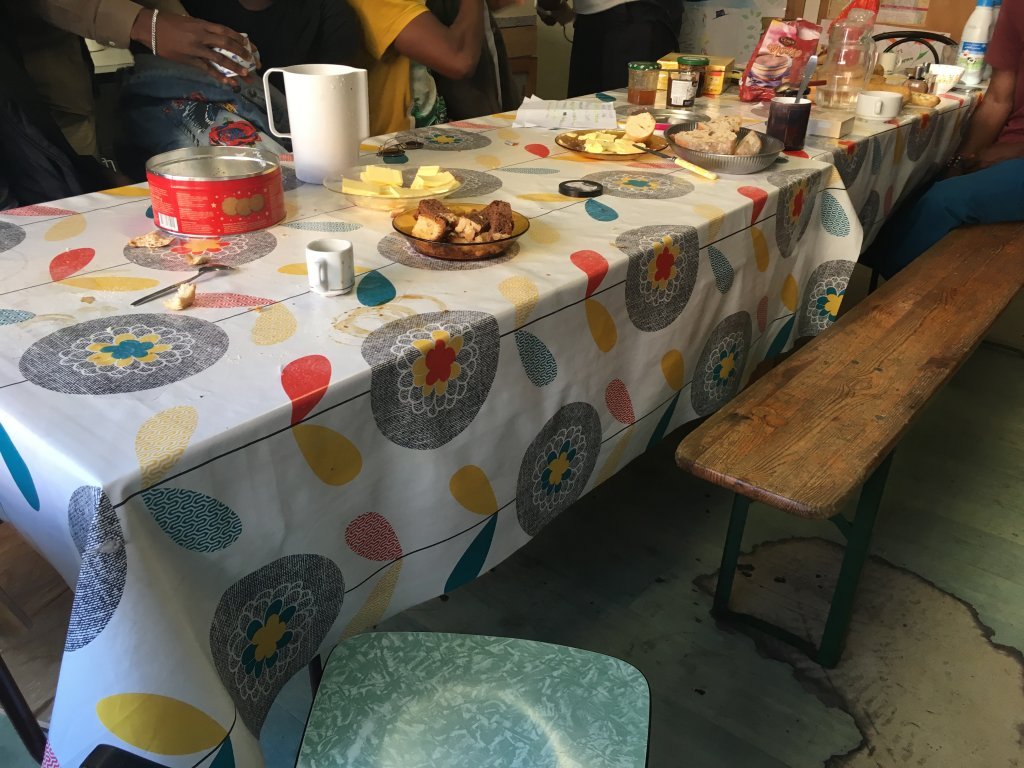 Life in the Refuge centers on a large table, installed in the main room that serves as both a kitchen and a reception space.

The walls are covered with instruction signs for migrants and visitors, and hold drawings of children and thoughtful messages from migrants who had stayed there before.

Etienne, 25, spent several months in a detention center in Libya. Today his body is covered with scars and bruises | Credit: InfoMigrants

In the courtyard, some young men set up chairs in a circle to play cards. Among them, Etienne, 25, says he chose to leave Cameroon because he could not find work and his family situation was complicated.

He arrived at the Refuge four days ago after spending more than two years in Italy. He decided to leave the country for France after his asylum application and his appeal were rejected. However, he did not imagine that the journey would be so difficult. 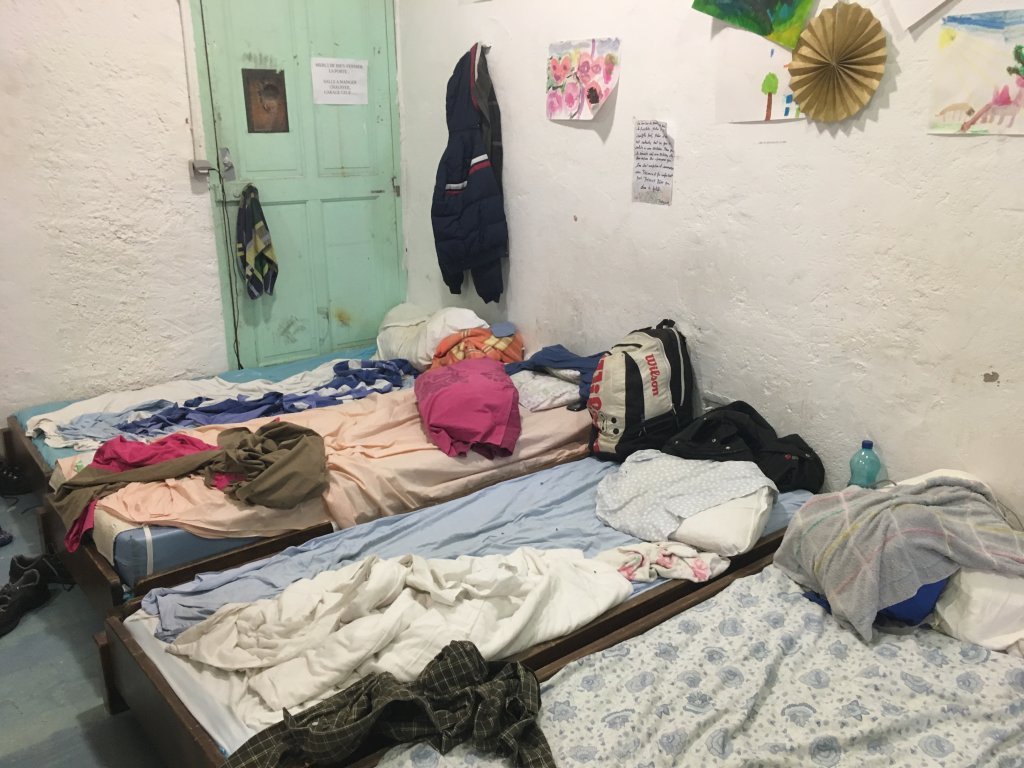 "Our walk started from Claviere (the Italian town closest to the border) at 9 pm along the road that leads to France. We walked until 8 am the next morning but kept hiding out of fear from the police capturing us. If they did, they would’ve sent us back to Italy,” Etienne says.

Although snow melted on the Montgenèvre pass, the path remains long and perilous, especially at night. Of the 21 people who left Claviere at the same time as Etienne, only three arrived in Briançon. The others were sent back to Italy.

Tired of his journey, the young Cameroonian wants to seek asylum in France. He also needs medical care, especially after his stay in Libya’s detention centers, which caused his eyesight to deteriorate.

Like most migrants, Etienne suffered a great deal of violence in Libya. His face and arms are covered in scars and bruises. Nevertheless, tired of recounting his story, he often gives a terse response : "In Libya, we were beaten all day long."

Most migrants at the shelter have been there for only a few days. Others, who arrived earlier, were welcomed into families in Briançon, while the rest have left the city - sometimes to seek asylum elsewhere.

Etienne’s roommate, Romaric, was also traumatized by what he experienced in Libya. The 24-year-old left Côte d'Ivoire in 2011 due to the violence surrounding Alassane Ouattara's disputed election.

Romaric also trekked from Claviere to Briancon. “Migrants that have already arrived in France indicate the routes to follow by others, in order to avoid getting arrested by the police,” he explains.

Since the reestablishment of the border controls at the French-Italian border in 2015, migrants face systematic arrests by the French police and are sent back to Italy. 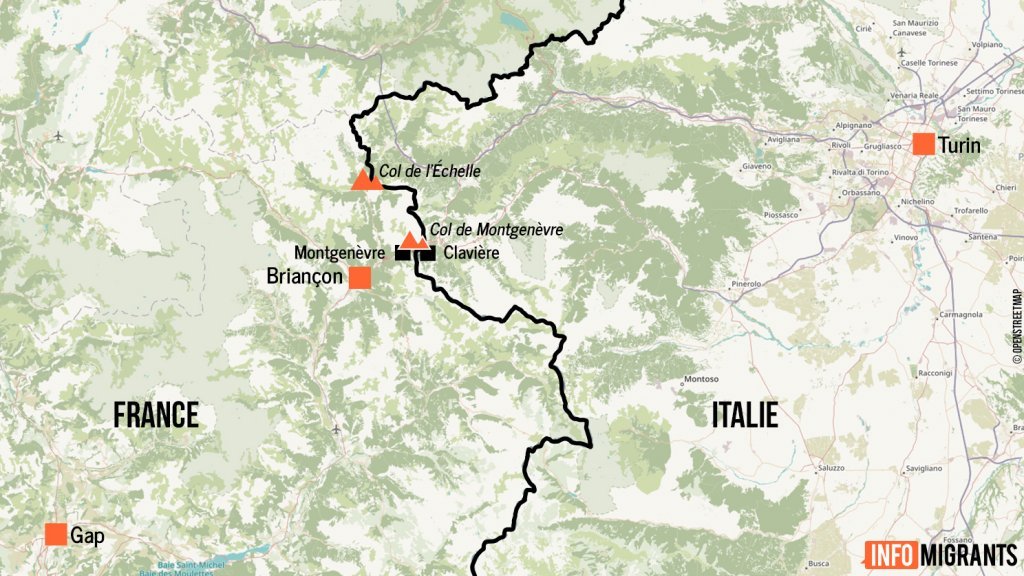 Migrants often panic and flee at the sight of police officers, which caused several accidents in recent months. Last May, the body of a Nigerian girl was found in Durance, near Briançon. She likely fell into water after being surprised by police officers on a route across the mountains connecting Italy and France.

Refugee support organizations hold the police responsible for such tragedies. In a statement issued on May 14, following the discovery of the body of the young Nigerian girl, the “All Migrants Association” issued a report to the public prosecutor to denounce police practices such as "ambushes and chases." The report notes: "These revolting practices, condemned by many police officers, have caused several accidents, sometimes ending in deaths [...]"

One of the migrants living at the Refuge shelter is among those who were injured due to a police encounter. Roland spends a good part of his days in bed. On his way towards Briancon, the 28-year-old Nigerian bumped into police officers and suffered from a hard fall while attempting to flee. Since then, he has had trouble walking.

"Ain't no mountain high enough," says a graffiti in the center of Briançon | Credit: InfoMigrants.

For Benoît Ducos, a volunteer at the shelter and a former mountain guide, "the rights of foreigners at the border are ignored." To denounce the actions of some police officers, the shelter’s volunteers collect testimonies from migrants who were abused when they crossed the border. According to Benoît Ducos, dozens of cases have already been documented.

In an interview with InfoMigrants, Cécile Bigot-Dekeyzer, a civil servant in Hautes-Alpes, said "since the reestablishment of border controls in 2015, the mission of the police at the Italian border is to check whether the person has the right documents that allow him to enter the territory of our country.”

"Police officer have never been instructed to put foreigners in irregular or dangerous situations,” Bigot-Dekeyzer said.

However, for volunteers of organizations aiding migrants, the situation is becoming more delicate. Benoît Ducos and six other volunteers - French, Italian and Swiss - were all summoned to court on November 8, and are being prosecuted for aiding in the illegal entry of about twenty people into the country.

Shelter volunteer Benoît Ducos took part in protests against the construction of a very high voltage line in the Durance Valley until 2016. He says that last week, he received a letter saying: “If you keep quiet for six years, you will not be prosecuted for the high voltage line-related events, but if for the next six years you commit the slightest offense, we will prosecute you."

For the volunteer from “Refuge Solidaire”, this letter is part of an "intimidation campaign" against volunteers sympathetic of migrants. Cécile Bigot-Dekeyzer, however, denies these accusations. "It is absolutely not about launching any campaign of intimidation whatsoever but only to enforce the law," the civil servant says.