'At night the UK looks close, but once water starts entering your boat, it's terrifying'

Mehdi Chebil
The number of migrants attempting to cross the English Channel on small boats has increased dramatically following months of good weather and a fall in freight traffic due to the COVID-19 pandemic. InfoMigrants visited the 80 kilometer-long stretch of coastline in the Calais region as the numbers of boat crossings hit a new daily high, with 416 migrants reaching the UK on September 3.
View over the Baie de Wissant, 20 kilometers south of Calais. People-smugglers hide small inflatable boats in the sand dunes and patches of bush near the shore.

A powerful spotlight sweeps the Channel Sea coastline at Dunes de la Slack, 30 kilometers south of Calais, racing across the edge of the dunes, from the high-tide waters to the almost empty parking lot. It's 3 o'clock in the morning on the 1st of September, but Frank and Julie, a French couple in the bed of their camper van, can't sleep because of the noise and lights.

"A police truck with a 4 meter-high mast supporting a very powerful light spot arrived here between midnight and 1 am. There were three other police cars. We couldn't hear exactly what the police officers were saying but they were clearly trying to track down migrants in the area", the couple told InfoMigrants the morning after.

The police operation forced migrants in the dunes to flee quickly, leaving behind two brand-new five-meter long inflatable boats and several personal belongings: water bottles, an external battery, cigarettes, life jackets, and even a post office receipt with the contact details of an Iranian man. Everything was left scattered in the sand, about 200 meters from the beach.

In this case, French police managed to prevent migrants from putting out their dinghies at sea. But along the 100 kilometers of beaches between Boulogne-sur-Mer and the Belgian border, several other boats were launched by people-smugglers. On September 3, British authorities announced that 416 people had reached the UK by boat, the record for a single day. Almost 200 migrants were stopped by the French police on the same day. 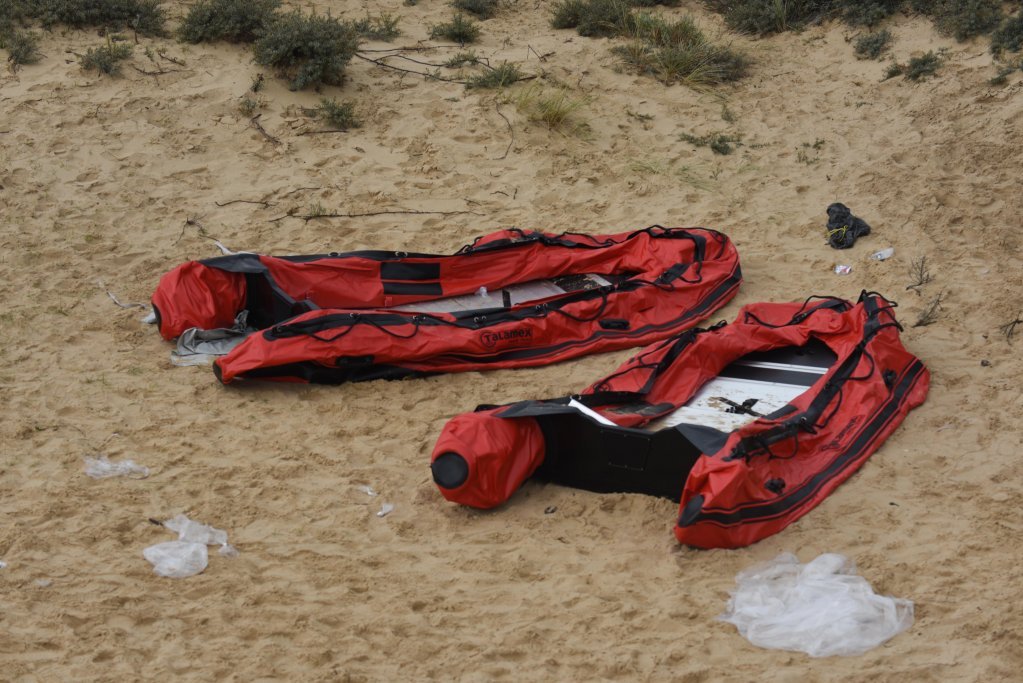 When looking at the pictures of the two boats abandoned at Dunes de la Slack, Arya laughs and asks where exactly he could find them. The 38-year-old Iranian, who doesn't give his real name, is still looking for a way to cross to the UK after his own attempt in early August was also foiled by a French police patrol.

"It was 4 am and the boat was already inflated (...) Suddenly police arrived and we immediately ran away. It was  dark and very confusing, I couldn't see if the people running behind me were police or other migrants," Arya told InfoMigrants.

According to him, the abandoned dinghies could have been brought by a group of migrants trying to cross the Channel independently. "There are people who try to do it by their own means, without smugglers, but they can be scared and completely give it up at the last moment because it's really frightening," he says.

A small boat in the English Channel, with the French side on the foreground, and the British visible far in the background.

Local sailors say that coastal tidal streams and busy shipping lanes in the 32 kilometers of water between France and England make it difficult to cross without a good engine.

"Migrants are not really aiming to cross these 32 kilometers, they just want to reach the maritime border, which is located halfway between the two countries. It requires know-how to properly inject fuel into the engine, but with 20 horsepowers and good weather, I could reach the maritime border in about 45 minutes", explains Maxime Clercq, an instructor at the Wiremeux sailing club. The travel time would of course be much longer if the boat is packed with several people.

At night, a pilot can get to the UK by aiming for the lights on the English side of the Channel, including a tall telecommunications antenna whose five red lights are clearly visible from the French side. 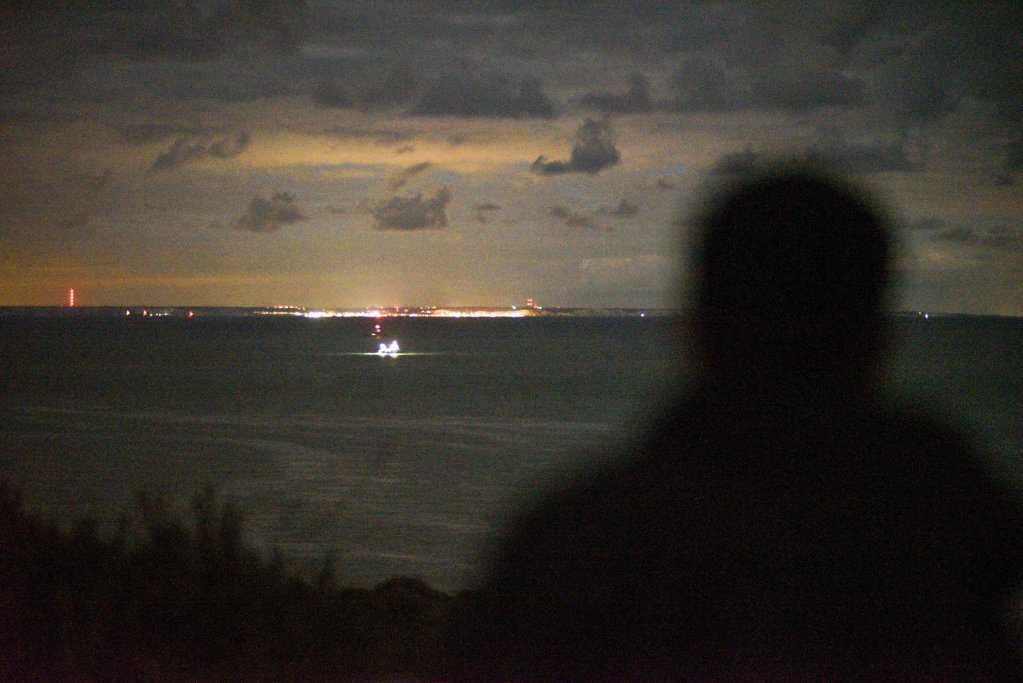 That is how at least 5,000 migrants made it to Britain since January 2020, sparking concerns of a migrant boat "invasion" on the British side.

The sudden increase in boat crossings is linked to a long spell of good weather between mid-March and mid-August, which is exceptional in this region. This came as the COVID-19 pandemic led to a sudden decrease in the number of commercial trucks traveling from Calais to Dover -- the "traditional "way to smuggle people into the UK.

The recent quarantine-on-arrival rule imposed by Britain on all travelers from France is likely to accelerate boat crossings, according to Pascal Marconville, the prosecutor of Boulogne-sur-Mer.

The decrease in trans-Channel truck traffic "explains ... why a lot of migrants, including Africans who are very poor, try their luck in unseaworthy vessels. The death of this young Sudanese man illustrates that sort of situation," Pascal Marconville told InfoMigrants, referring to the drowning of Abdulfatah Hamdallah, a 28-year-old man who died in mid-August after attempting to cross on an inflatable dinghy using shovels as oars.

A migrant waits in the bus that will take him to a place where he can take a shower, while a police operation in underway in the Calais hospital camp.

Smugglers, on the other hand, quickly improved their skills in sending boats across the Channel. They routinely organise departures from beaches dozens of kilometres outside Calais, and there are unconfirmed reports of attempts to launch several boats simultenaously.

The French navy doesn't intercept boats that are already on their way to the UK, the Boulogne prosecutor told InfoMigrants. "The maritime prefect doesn't want that passengers be put in danger by an attempt to storm their boat, which infuriates the British side, who say that we don't do our job. We have seen migrants putting gasoline on themselves and threatening to set themselves alight. Others showed very young kids onboard, saying that if French sailors insist they will all capsize and the children will drown", said Pascal Marconville.

But in Calais itself, French authorities have intensified police raids on makeshift camps, with a series of thorough dismantlements on July 10, 17, 30 and August 21 that have emptied the patch of bush near Rue des Huttes, where hundreds of migrants used to stay.

"The French government's policy in Calais is to put pressure on the migrants and the charities helping them to keep their presence as low-profile as possible. These harsh conditions of living are actually pushing more migrants to take the risk to cross by boat", said François Guénnoc, head of the Calais-based charity l'Auberge des Migrants.

About 7 out of 10 migrant boats now reach the UK, according to him. "Their success rate is well known among migrants in Calais", adds Guénoc Migrants in Calais confirm that boat crossings are now the smugglers' top option. They noticed that good weather predictions draw more people hoping to cross into the UK.

"Now they are offering boats!", Senay, an Eritrean trying to join his brother in the UK, told InfoMigrants. He and his girlfriend came to Calais from Belgium to check what were the current passage options. They would prefer to hide into a truck rather than pay 3.000 euros per person to cross in a small boat. But it remains really hard to pass the anti-smuggling security checks at Calais harbour.

"We know that crossing by boat is not safe, so we don't ask guarantees. Even if smugglers say it is safe, we don't believe them (...) It still seems easier than to cross the Mediterranean", explains Senay. The fear of capsizing and drowning in the middle of the night is strong, even for migrants who know how to swim. Khalid Khan, a 24 year-old Afghan, described how he boarded a small boat around 2h30am in early August, without any life jacket. His cousin in the UK had paid his passage but smugglers told him that the life jacket was "his responsability".

"We were 14 for a small boat: six Iranians, four Vietnamese, and four Afghans. They all had lifejackets except for me and another Afghan. I can swim and I decided to take the boat. But after an hour and half, the engine stalled several times, we had too much water in the boat and the rear was sinking too much", Khalid Khan told InfoMigrants.

"I saw myself dying. With the other Afghans, we insisted that we go back to France. The Iranians wanted to keep moving towards the UK and we had a big argument. The Vietnamese sided with us and we eventually returned to the French side", adds Khalil Khan.

The four Afghan disembarked and the boat then restarted its trip towards the UK, with much less weight.

"I know that they arrived safely in the UK", says Khalid Khan. "At night, when you look at the UK from the French side, it looks close. But when you're on a boat and that water starts entering, it's terrifying"