Cyprus, a peaceful island in the middle of an unstable region and split by a demarcation line not recognized as a border, is seeing rising numbers of migrants entering the island to gain access to the Greek-speaking southern part of the island which is an EU member state. The island’s proximity to Turkey and Lebanon is leading smugglers to offer risky crossings to Syrians.

More and more migrants are attempting to reach the European Union by crossing over to Cyprus from Turkey.

In two years, the number of first-time asylum applications in Cyprus has more than tripled, rising from 730 people at the beginning of 2017 to more than 3,000 at the beginning of 2019. Mustafa, a refugee who spent 26 hours hiding on a ferry from Turkey to Cyprus, is among those who are optimistic about their prospects on the island. "As soon as I leave the camp, I'll find work and rebuild my life," he told news agency AFP.

Although the number of refugee and migrant arrivals to Cyprus is low compared with those in Italy or Greece, the island nation now has the highest rate of migrant arrivals of any EU country relative to its population. According to the European statistics office, Eurostat, it’s eight times higher than in France.

This does not include refugees or migrants living in the breakaway Turkish-administered northern side of Cyprus, divided from the internationally recognized Republic of Cyprus (RoC) since 1974. The RoC has a population of roughly one million.

"For refugees, Cyprus was never an ideal destination: It's an island and it's very far from Europe," said Zenonas Tziarras, a researcher at PRIO Cyprus Centre. "But now it's their only solution: Routes to the EU from Greece are closed, and the living conditions in countries near Syria, like in Turkey and in Lebanon, are getting worse," he said.

Cyprus is just 100 kilometers (62 miles) from Lebanon and 80 kilometers from Turkey. The relative proximity is leading traffickers to offer this risky crossing to Syrians, who currently make up the largest group of refugees in Cyprus.

Syrian refugee Omar, 33, is one of them. He was living in a refugee camp in Lebanon when he managed to raise the $1,000 needed to take a boat to Cyprus. "The price was very low, it was a three-meter inflatable boat," he said to AFP. The seven other passengers, all Syrian like Omar, drowned during the crossing. Omar drifted for three days at sea on a tire before being rescued by a cargo ship. But, as he said, he would "prefer to die at sea than in Syria."

Currently, there are two facilities dealing with new arrivals in Cyprus. However, a Cypriot asylum services official told AFP that reception services are saturated, and it can take between six months and a year to grant authorization to work in Cyprus. “Before, we had dozens of refugees per year, now it's thousands in a quarter,” the official said, asking not to be named. “How can we cope?"

In Nicosia, the capital city of the RoC, the NGO Caritas has also seen a "dramatic increase" in migrants seeking its help, said Elizabeth Kassinis, Caritas' executive manager in Cyprus. Other than Syrians, she said the organization is “getting more and more people from West Africa.”

In 2017, UNHCR criticized the living conditions in the “Reception and Accommodation Centre” south of Nicosia, which is run by the Cyprus’ asylum service. However, UNHCR said the Ministry of Interior has since “significantly improved the conditions” of the camp.

According to UNHCR, approximately half of all migrants arrive on the island at the Turkish-administered north where there is no asylum system in force. The vast majority of migrants land in Ercan, the northern part’s only airport, where passing through customs is reputedly easier than in the south, according to experts. "For Nicosia, the Turkish occupation means the migration situation can't be controlled. It's a headache," researcher Tziarras said.

Migrants then take the well-trodden route of sneaking across the dividing buffer zone, or ‘Green Line,’ into the RoC. According to the Cypriot interior ministry, the number of persons irregularly crossing the line has been increasing in recent years: In 2019, 3,000 refugees crossed the Green Line to request asylum in the south, compared with only 138 in 2017. 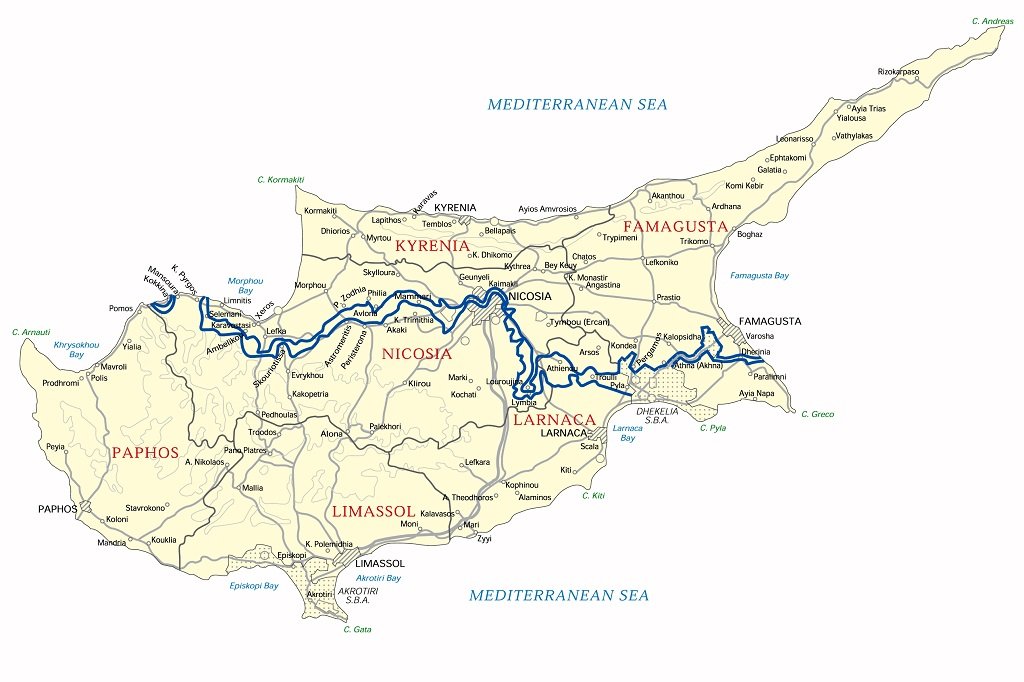 Stretching 180 kilometers across Cyprus and ranging from a few meters to a few kilometers in width, the notoriously porous UN-patrolled ceasefire line offers innumerable blind spots for those determined to evade detection.

While the Green Line is not considered a border, there are authorized points of crossing along it. These are not considered official entry points into Cyprus (RoC) though.

At loggerheads with Ankara, Nicosia has accused authorities of the northern part of turning a blind eye to smugglers.

The unprecedented geopolitical situation in Cyprus - a peaceful island in the middle of an unstable region and split by a demarcation line not recognized as a border - “makes the situation worse,” researcher Tziarras said.

He emphasized that while Turkey "is part of the problem", support for Cyprus "can only come from the EU", especially in financial terms. A "Schengen" border, with strict controls, separates refugees from the majority of other European countries.